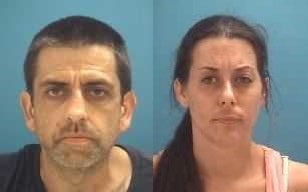 COLUMBUS, Ind. (WISH) – Police in Columbus arrested a man and a woman Monday for burglary.

According to the Columbus Police Department, officers responded to a building in the 4400 block of West Jonathan Moore Pike at approximately 8 a.m. on Monday, Sept. 3. for a report of a burglary in process.

After arriving on scene, the building manager told officer he saw two people inside the building on a live security video.

Soon after getting to the scene, Jason Brown, 42, and 36-year-old Megan Nyberg were spotted exiting the building.

While inside the building, officers witnessed a number of items that had been placed next to a door next to Nyberg’s vehicle.

Both suspects were taken to the Bartholomew County Jail. Brown and Nyberg face a preliminary charge of burglary.