2 good Samaritans rescue dog from I-465 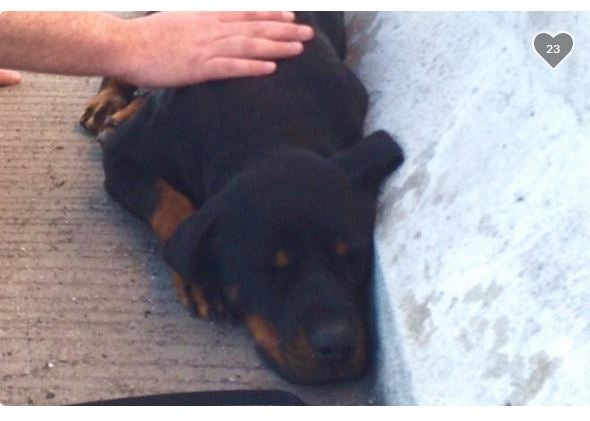 INDIANAPOLIS (WISH) — A young dog is recovering from serious injuries after it was found in the middle of a busy interstate.

Two good Samaritans said they saw a dog in the median of I-465 Monday morning.

The young dog believed to be a Rottweiler now has a broken leg, and a wound so deep it goes all the way down to the muscle tissue.

The rescuers are outraged by the actions of the owner who left the dog to die in the middle of the highway.

The young dog still without a name is recovering at the VCA Advanced Veterinary Care Center in Fishers. The vet believes she was hit by a car, but how she ended up on I-465 is still unknown.

“I pulled over and literally walked by and realized the closer I got to her she lifted her head again,” said Greg Pirkl. “I realized she had been hit or something had happened to her.”

Greg Pirkl said he has four dogs of his own and wanted to help. He crawled and laid down next to the dog to show her he was no threat.

“I realized, wow, you’re laying down on the freeway near the fast lane and at that point, I became a little bit nervous,” said Pirkl.

Dozens of cars passed by, but one driver decided to stop. Holly Schipp said she was heading to class at Ball State University that morning.

“I had tears in my eyes before I got out of the car yesterday,” said Holly Schipp. “I gasped when I realized what I was going on. I mean it was just what do we need to do?”

The two strangers worked together to gently move the dog into Schipp’s car. Schipp said another driver helped to block traffic.

They’re now hoping to raise enough money to help pay for the dog’s medical treatment and surgeries. So far, they have raised more than $6,000.

“I think she’s a very resilient little girl and she’s going to pull through whatever they’re going to need to do,” said Schipp. “I think you know, we want to keep the leg, but if we keep her alive that’s the most important thing.”

Schipp already has one dog at home, but is planning to adopt the Rottweiler.

Meanwhile the vet said it should take the dog about two months to recover. Surgery is planned for Wednesday to fix her broken leg.

The vet said surgery will only take place if her heart rhythm has stabilized.