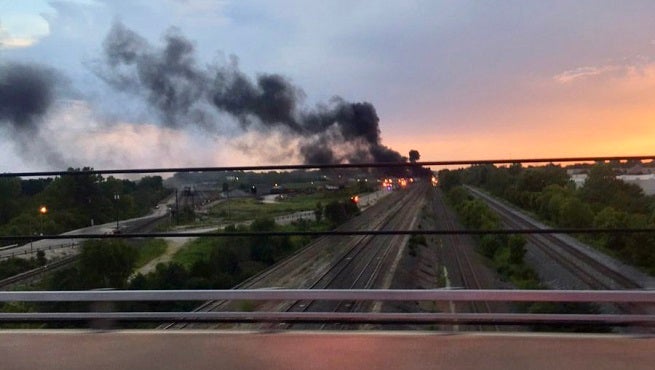 Firefighters were sent about 8:40 p.m. Wednesday to the CSX Avon Railyard south of U.S. 36 between Dan Jones Road and Ronald Reagan Parkway. Lots of black smoke was visible from the scene, which is in the center of the rail yard.

Lt. Jerry Bessler with the Washington Township Avon Fire Department said no injuries were reported. No roads were closed as a result of the fire, and no evacuations happened, he said.

Shortly before 10 p.m., crews had gotten the fire under control but were working to contain fuel continuing to leak from the locomotives.

CSX said two locomotives derailed, but they were upright.

“Just after 9:00 pm ET on Wednesday, July 10, CSX employees reported that two locomotives derailed at Avon Yard in Avon, IN. The locomotives spilled an unknown quantity of diesel fuel that caught fire within the yard. Marion County Fire Department responded to the scene and quickly extinguished the fire. The locomotives are upright, in line and the fuel spill has been contained. There are no injuries, no safety risk to the public and no waterways impacted. CSX appreciates the swift response of the local fire department and are working to develop a recovery plan.”