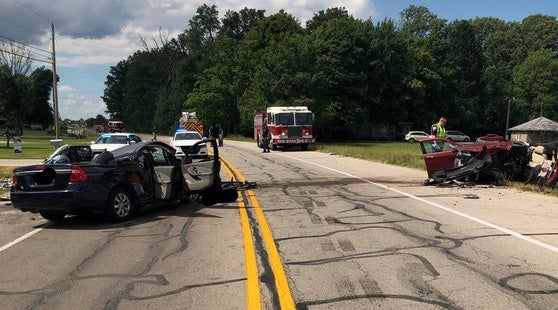 Police from New Castle and Henry County plus New Castle medical crews were called just before 3 p.m. Thursday to the crash in the 2600 block of State Road 103 South, according to a news release from Indiana State Police.

Doris Crawford died after being airlifted from the scene to an Indianapolis hospital.

Investigators believe Katherine Brown, 55, of Muncie, drove a 2005 Chevrolet Malibu south on the state road when for unknown reasons the car went into the northbound lane. Brown’s car hit a northbound 2014 Chrysler 200 driven by Crawford.

Brown and a passenger in the car she drove, Jimmie Brown, 59, of Muncie, were airlifted to hospitals in Indianapolis.

The road was closed for more than three hours for a state police reconstruction team.

An investigation of the crash was ongoing, state police said.