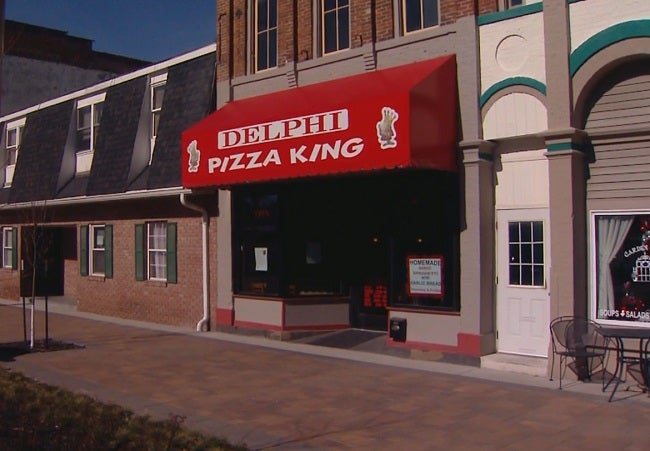 DELPHI, Ind. (WISH) — Police are now into their fourth day of the investigation into the murders of two teenage girls.

Officers served a search warrant at a Carroll County home Thursday night but did not arrest anyone. Police won’t say what they were looking for in that home, but whatever it was, they don’t believe they found it.

One sergeant said police are back to where they were before the search warrant, in his words, basically back to square one.

Investigators picked up some help today from homeland security in Tippecanoe County. Police are using their communication satellite. Officers say this creates more phone lines and a faster internet connection.

Detectives say at this point, they’re receiving hundreds of tips a day. And that’s not the only way locals are lending a helping hand.

Tracy Martin is the owner of Delphi’s Pizza King and has been for the last eight years. She makes her living off food. The pizza she sells pays the bills. But in her words, the gift of giving comes back three fold.

“It wasn’t hard for us to decide, whatever we make, somebody else needs it worse this week,” Martin said.

Next Friday, the restaurant will donate 100 percent of their sales to the families of Abby Williams and Libby German. Martin says those families are frequent customers.

A number of other establishments in the area are lending a helping hand.  Hometown Shirts and Graphix has created a shirt with proceeds raised from the sales going to the families.

“I didn’t know the girls personally, knew of them, knew of the families, but that’s just how this community is,” Hometown Shirts and Graphix owner Mark Mendal said. “Everybody pulls together.”

On Tuesday, the Delphi in McDonald’s will donate a $1 from Big Mac meals to the teens’ families.

“It’s just something to help out the community,” McDonald’s store manager, Jenelle Foddrill said. “We’re devastated and heartbroken for the families and what they’re going through so we just want to do something to pitch in and help out as well.

Johnny V’s in Frankfort has a collection jar for the families and The Creek in Buck Creek is giving $5 of every specialty pizza order now through Saturday to the families.

“I think it’s great that they’re doing it,” Delphi resident, Jericho Stevens said. It’s helping the family out to deal with all this. It’s not so much stress on them of this happening and they don’t have to worry about expenses or anything.”

That same community is also hoping for justice.

Investigators launched a tip line yesterday. Police say one of hundreds of tips led them to search a Carroll County home Thursday night.

Detectives have not identified a suspect and they have not found this person spotted walking near the trails. ISP Sgt. Kim Riley said police could serve more warrants in the days to come.

“If we feel we need to go in and look at a car or a house or whatever, we’re going to do what we have to do to get that information,” Riley said.

On Saturday, locals will have a motorcycle ride to help the families. Registration begins at 11:30 a.m. at the Office Tavern Bar and takes off at 12:30 for the Whiskey and Wine Saloon in Monticello. Cost is $20 per bike and $5 per passenger. Cars are welcome. It is asked that riders and passengers be 21 years of age.

Police are urging people, no matter how insignificant you think your tip might be, to call police if you think you might have important information. That number is 844-459-5786.