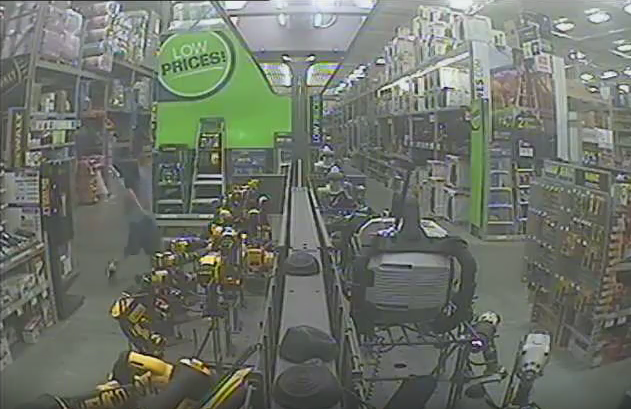 BEECH GROVE, Ind. (WISH) — Police in Beech Grove are seeking the public’s assistance in tracking down a man they said stole a power tool from a Lowe’s hardware store and injured a man while fleeing.

It happened Tuesday morning around 10:30 a.m. when a man was caught on video shoplifting a power tool out of a Lowe’s on Emerson Avenue.

As the man attempted to get in his vehicle, a citizen who saw the man shoplift attempted to stop him as he drove away. This resulted in the suspect driving away with the the citizen clinging to the vehicle, before he ran into another car which knocked off the citizen.

The citizen that clung to the vehicle suffered broken ribs and cuts to his upper body.

You can see the incident take place in the upper right portion in the video above.

The suspect is described as having dark hair, possibly in a ponytail and driving a silver or white four door vehicle.

If you have any information on this incident, you are urged to call the Beech Grove Police Department at 317-782-4950.