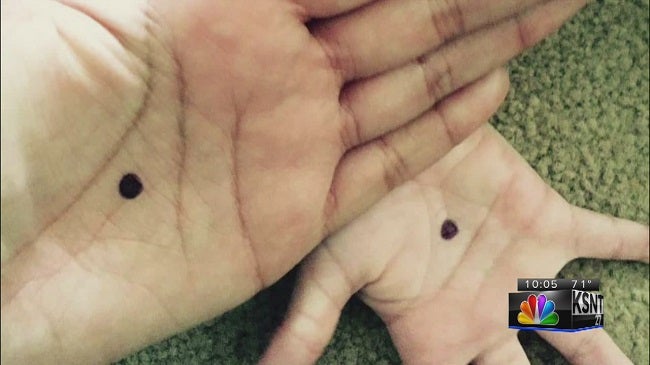 A new campaign trying to do just that on Facebook has sparked a lot of controversy over the last several weeks.

It’s just a single black dot, but it has so much meaning.

The ‘Black Dot Campaign’ launched earlier this month on Facebook enables victims who cannot ask for help verbally to ask for help with a simple black dot on their palm. People recognize this and offer to help.

Darlene Waters is the founder of the Topeka based domestic violence group Kaitlin’s Kloset. She says campaigns like this are a great tool to start important conversations.

“Just letting people know that it hasn’t gone away, it’s still out there,” Darlene Waters, founder of Kaitlin’s Kloset.

The creator of the ‘Black Dot Campaign’ on Facebook says this campaign has helped reach 10-million people worldwide.

This conversation has prompted some people to share their own story on the social media site.

But with campaign’s widespread awareness, it’s important to note this cry for help is not as discreet as some may think.

One person posted on the site, “If the abusers know about this black dot campaign and see a black dot on their victims hand it could put them in more danger.”

“Those who are abusers are going to possibly find out pretty soon, and they are going to be watching for the dot themselves,” Barry Feaker, Director of the Topeka Rescue Mission.

Barry Feaker with the Topeka Rescue Mission, sees domestic abuse situations coming in and out of its shelters every day.

He says in situations like this, it’s important to have a safe place for victims to go.

“When they come in to the mission it’s mainly women and children. They can come here, they will be in a safe secure area,” said Feaker.

According to the campaigns Facebook page, it’s helped 49 people escape from their abusers to a safe place.

It’s important to note that black dot is a grassroots campaign.

Medical personnel or law enforcement you come in contact with may not be aware of its existence.

If you are a victim of domestic abuse there is help call the national domestic violence hotline is available 24 hours a day, seven days a week 1-800-799-SAFE (7233).