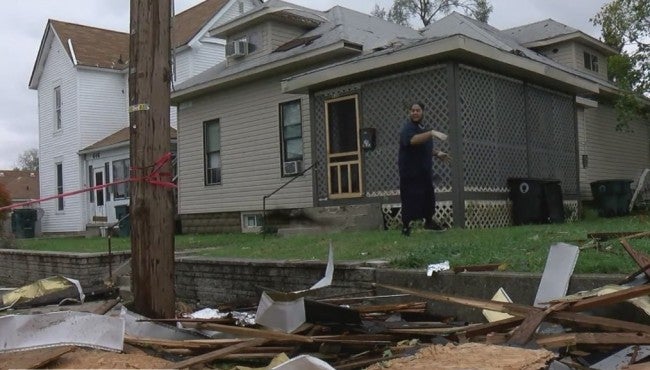 MUNCIE, Ind. (WISH) — Neighbors are cleaning up after a tornado touched down Sunday.

The National Weather Service confirmed an EF1 tornado briefly passed through Muncie. It might’ve been brief, but residents say it wasn’t brief enough.

Everywhere you looked, crews were out in full force. Wood chippers took care of the debris strung out all over Walnut Street near Muncie Central High School. Electric company crews worked tirelessly to restore power. Thousands were without electricity.

But power was the least of Theldert Scott’s problems. “Right there, that’s where I was when it hit,” he said.

Tucked away in his bedroom, Scott was watching TV when …

“Boom! Sitting there and the TV is coming at me,” he said.

In a split-second decision, Scott raced down to the basement. Before five minutes had passed, the storm had also passed. Scott went out to assess the damage.

The storm didn’t just destroy his garage. It was so powerful that most of it ended up across the street where it’s blocking the neighbor’s home.

“His garage was completely blown over here,” said Robert Anderson, who lives across the street.

The debris from Scott’s garage missed Anderson’s home. But, something did manage to flatten his tire and ding up his truck.

For Scott, he’s just grateful that he is alive, “They talk about sentimental value and stuff. This body is sentimental enough for me.”

There were no serious injuries reported.