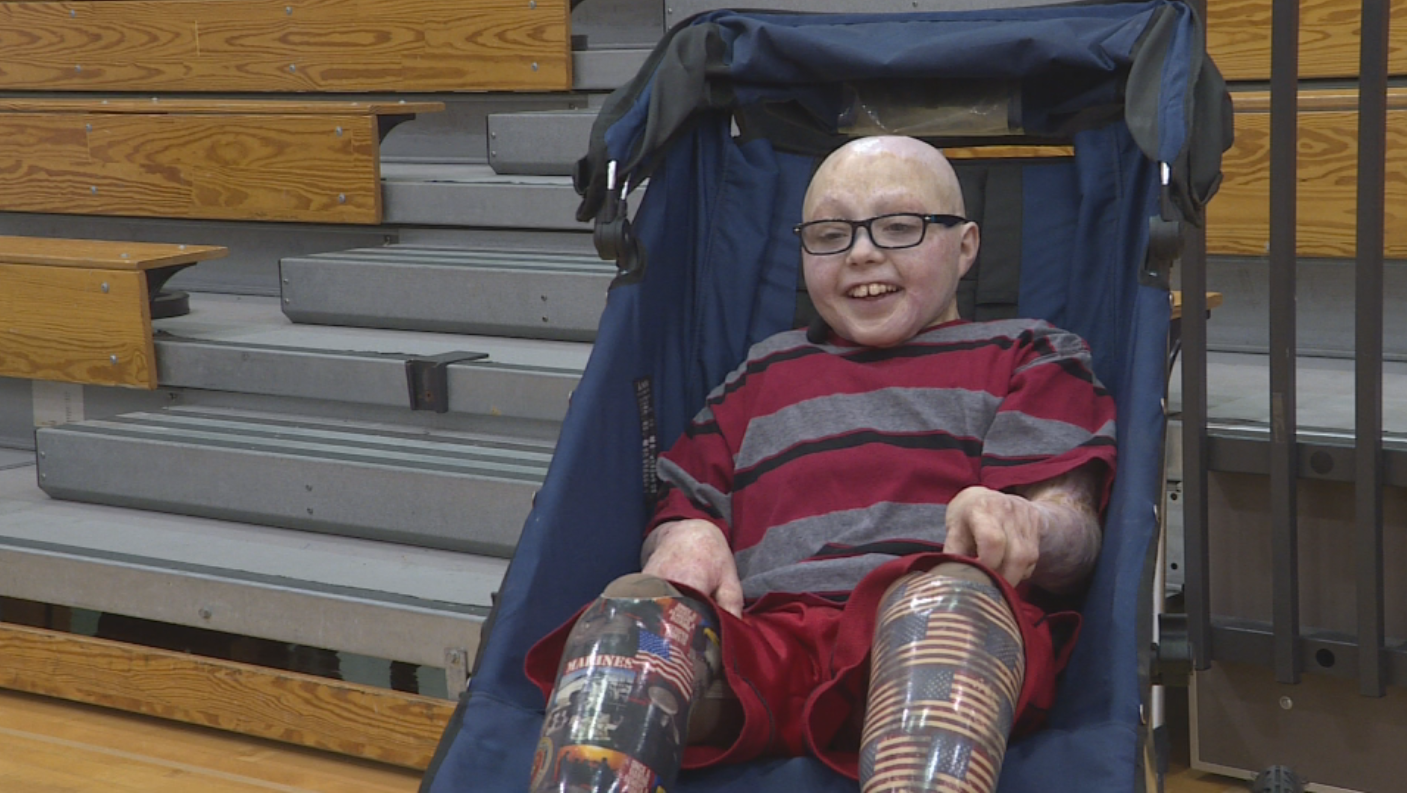 AVON, Ind. (WISH) — One of the stars of this year’s 500 Festival Mini-Marathon might not be a runner or a walker. Owen Mahan is a burn survivor and will finish the race on a three-wheeled jogging wheelchair.

Avon mom Alli Louthain will run behind him all 13 miles, pushing him through downtown Indianapolis around the Indianapolis 500 racetrack and past the finish line. She is friends with Mahan’s nurse and says Owen’s story inspired her.

“[Owen] has chosen to live his life like a victor instead of a victim,“ said Louthain.

Louthain and Mahan spoke to 5th graders at Avon Intermediate School West this month, sharing their journey so far and their hopes for the race.

“Like all of you, he’s also a 5th grader,“ Louthain told the crowd assembled in the gymnasium. “He likes Star Wars and he can pound away a sugar cookie probably faster than many of you. But unlike you, Owen was nearly burned to death at the age of two.“

The statement was true and Owen Mahan was at the beginning of a long journey that would include the amputation of both his legs below the knee along with nearly 100 surgeries by the time he’s done growing.

Susan Mahan explained there were no charges of child abuse or neglect filed in Owen’s case, but Child Protective Services did remove him from his Indianapolis home and put him in foster care with the Mahan family.

“I was actually going to call the caseworkers the next morning and I wasn’t going to do it,“ Susan Mahan explained. “I don’t know what woke me up between 3 and 4 in the morning, and I woke up and I’m like, if Owen can do this, I can.“

“Owen has every right in the world to be angry at the world. I mean look at him, two to three surgeries every year while he’s growing,“ she said. “He always has a smile on his face and nothing seems to get him down.“

Owen attends Pittsboro Elementary School full-time and has spent three afternoons so far sharing his story with his peers. Now that he’s teamed up with Allie Louthain, the two have a new message to share about working together to do hard things.

“Owen and I are going to be stronger together than we would be alone,“ Louthain told the crowd at Avon Intermediate School West. “Owen has given me a reason to choose to have an ‘I can’ attitude.“

“It’s going to be a great day. That’s what I say every morning,“ echoed Owen.

“Owen and I are going to be stronger together than we would be alone. Owen has given me a reason to choose to have an ‘I can’ attitude.” This little boy is so inspriring. Brenna Donnelly introduces us to Owen Mahan. STORY: http://bit.ly/2Yzy8X3Posted by WISH-TV on Friday, March 29, 2019

At the elementary school, Owen raced several students and even some teachers in a special “on your knees“ race. He won easily every time, being very practiced at balancing and walking on his knees.

The students made signs cheering on “Luke and Leia,“ the team name the two will run under in May, and also “Chewy,“ Louthain’s 13-year-old son who will run alongside them.

So far Louthain has been training on her own, pushing the three-wheeled chair weighted down with dumbells. By May 4, she’ll have 90-pound Owen inside and wants to make sure the two have a comfortable ride. Owen says he’ll help.

Owen’s race wheelchair was donated by Ainsley’s Angels of America, a non-profit dedicated to enabling those with special needs.