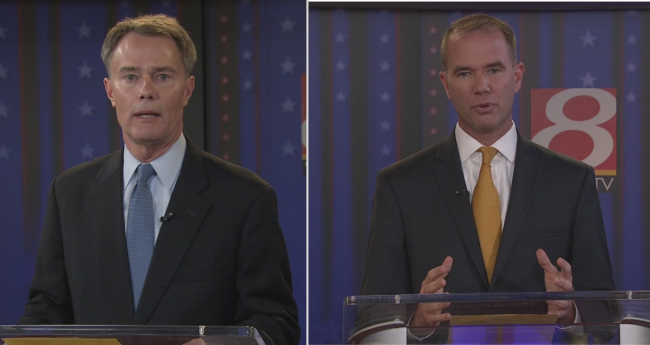 INDIANAPOLIS (WISH) — We are 15 days from Election Day and Republican Chuck Brewer is running out of opportunities to make up ground in the race for mayor.

That’s because when the two candidates met in a debate on Friday, Brewer did little to raise his profile.

It allowed Hogsett, who has a substantial lead in private polling, to play it safe.

The WISH-TV debate was successful in pointing out some differences between the candidates for mayor.

But, for the most part, they sounded alike.

“I want to add 150 officers so we can return to more neighborhood-based, community-based, beat-oriented policing,” said Hogsett.

For Chuck Brewer that’s not good.

He needs voters to see a contrast between him and the better known Democrat.

His hope is that they will reject Joe Hogsett for being a political professional.

“You know I’ve got no experience in politics, but I’m a very strong leader and I’m a savvy businessman,” he said.

Hogsett, a former U.S. Attorney, is presenting himself as a crime fighter.

“But I can’t do anything to prevent crime as the prosecutor,” he said. “All I can do is hold people accountable. That’s when I decided to run for mayor. I want to lead Indianapolis back to a city that is safe.”

And crime is the biggest issue in the race. That may be all you need to know.