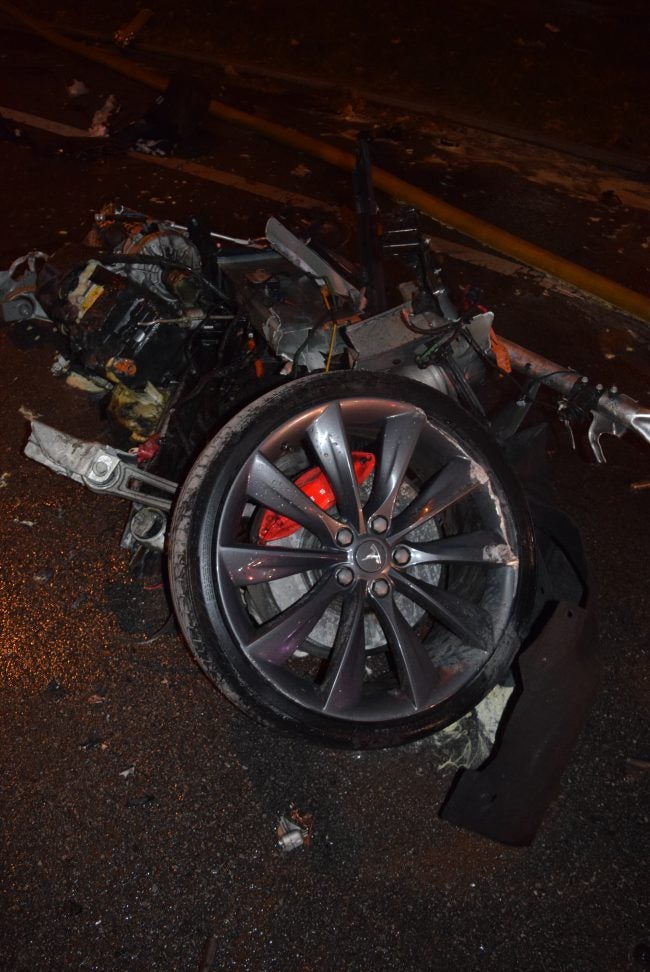 INDIANAPOLIS (WISH) – Investigators are looking into what caused a deadly crash involving a Tesla on the city’s near north side.

IFD says the two were driving north on Illinois Street near 16th Street, lost control and then smashed into the tree and then into a parking garage.

Witnesses described the scene as horrific.

“There was one big explosion at first and then there were several small ones and debris just kept popping up in the air,” said Alfred Finnell,

Firefighters say the debris field stretched 150 yards. The small explosions were likely lithium batteries. Those batteries were still on scene later this morning. But the main power source for Teslas is a 400-volt battery  in the floor.

“With the high voltage batteries they’re lithium ion batteries and they require copious amounts of water to extinguish them, they burn very hot,” said Kevin Jones, the Battalion Chief of Special Operations for the Indianapolis Fire Department.

IFD says it took them 10 minutes to put the fire out, and 20 minutes to get McCarthy out. Speckman died in the crash. Firefighters say even when using the jaws of life, getting victims out  of newer cars can pose problems.

“Back in the 1980s the vehicles you could come up there and cut pretty much everywhere and not have a hazard. But now with the introduction of airbags and the seat belt  retention and the high voltage lines we have to peel and peak and look and make sure we’re not going to cut into something that will cause a hazard for us or the victims,” said Jones.

In a manual for first responders posted to Tesla’s website, firefighters are warned not to touch the vehicle until the fire is out.

“These crews train for these types of incidents, but it always affects them whether they show it or not, because unfortunately these men and women see it a lot,” said Jones.

A wedding website shows Speckman and her fiance were set to get married on September 22, 2017. That they met at IU, dated for over 9 years, and that he proposed in Key West Florida, the same place where they were to be married.

A LinkedIn page for Kevin McCarthy shows he is the President & CEO at Express Software and Services, based in Indianapolis.

The two were coworkers.

The family of Casey Speckman released this statement:

“The Speckman Family is grieving the sudden loss of Casey, beloved daughter, sister, cousin and fiancee. We ask that you please respect our privacy during this difficult time.”