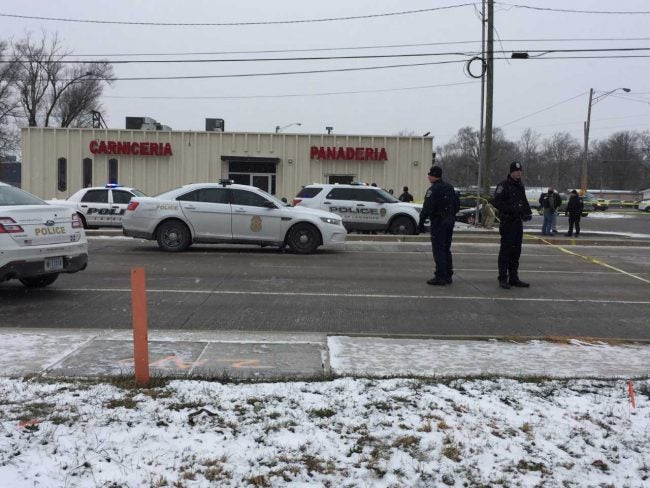 LAWRENCE, Ind. (WISH) — A gunbattle between Lawrence police and a suspect right in the middle of the street ended with the suspect dead.

It happened about 12:45 p.m. Tuesday at the corner of Pendleton Pike and Post Road on the east side. That was just one of three crime scenes that ended with the suspect’s death.

The first crime scene was Big Boy Hobbies, 8893 Pendleton Pike, near Post Road. The suspect allegedly robbed the store at gunpoint and drove off.

Lawrence Deputy Chief Gary Woodruff said, “Our officers got behind that vehicle very quickly and went to stop it and the driver, who’s also a suspect in the robbery failed to yield to police.”

“The suspect got out of the vehicle and carjacked a second vehicle with victims inside that vehicle,” Woodruff said.

The deputy chief said the suspect used a gun to take control of a vehicle. A woman, who has not been identified, was still the vehicle when he crashed at Pendleton Pike and Post Road, the third crime scene, which is near the first crime scene.

“The vehicle came, slid and hit the median hard, probably about 20 feet away from my truck. Guy got out and just started shooting at the police,” said witness Craig Waller.

Walker heard about four to five shots before police returned fire near the busy intersection.

But, it wasn’t confined to the intersection. Signs of the gunbattle weren’t hard to find. A nearby plaza had crime tape around it. At least five bullet holes in the window. One bullet was lodged in the window frame.

“It took him about 10 seconds to climb out of the car in his socks and start shooting at the officer,” Walker said.

Multiple officers fired at Scarsbrook and he died at the scene. No officers were injured.

“It would seem the officers exercised some significant discipline when it came to trying to neutralize the threat and save lives,” Woodruff said.

The carjacking victims did not have physical injuries, but were taken to a hospital.

Investigators said a second suspect may have been involved in the robbery. People with information were asked to call Lawrence Police Department.