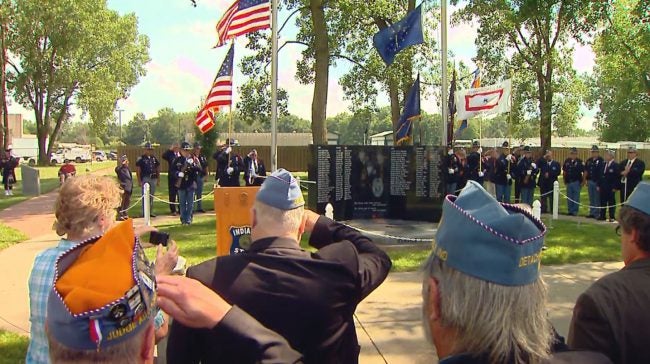 It was held at the Indiana State Police Memorial and Eternal Flame at 8660 East 21st Street. While the event has been planned for a while, it comes less than 24 hours after five Dallas officers were killed Thursday.

Gov. Mike Pence, State Police Superintendent Doug Carter and members of The American Legion were among the guests.

The Sons of the American Legion, Detachment of Indiana organized the event. Members of the group have either a father or grandfather who served in previous wars. They said often times a veteran would serve again when they return home as a member a of law enforcement, part of the reason they host the ceremony. They were prepared to honor fallen Indiana State Police troopers and employees, but they never expected to also pay their respects to the five law enforcement officers killed in Dallas.

“We pause to pay a debt of honor and a debt of gratitude for their sacrifice,” he said.

Sitting in the crowd was Steve Smith, a member of the Sons of the American Legion. He said understands the gravity of that sacrifice officers make all too well.

“I have a fallen officer in my family so I understand how it affects everybody. I mean all police officers have families to go home to and when they don’t come home, it creates a world of misery for everybody,” said Smith.

Those words couldn’t be more true as the group shared its grief with others across the nation after five officers were killed in Dallas, Texas.

“Please keep the entire Dallas police department and all involved in your inner most thoughts and prayers, especially the surviving family members of those slain officers,” said ISP Superintendent Doug Carter.

“My hope is that people across this state and nation will take a moment, walk up to a police officer and just say thanks for the sacrifices that they make each and every day,” added Governor Pence.