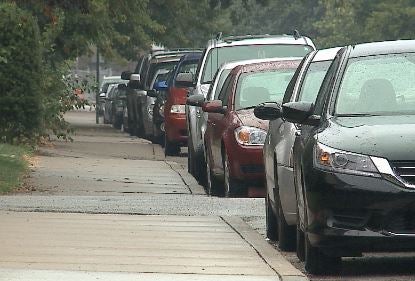 INDIANAPOLIS (WISH) – The growing pains that some are experiencing as the the city continues to grow is normal, but some residents are fed up.

The issue is all about parking, particularly in the Mass Ave area.

“There’s too much going on on Mass Ave. Too many people want to be here,” said Sally Spiers, president of Chatham Arch Neighborhood Association.

The area is full of downtown Indy’s nightlife, but the limited parking, and lack of a garage is irking homeowners.

“We’ve been become a parking lot for the Mass Ave and downtown people,” said Spiers.

“About any time of the day and night you can look down through here and see that it’s kind of full,” said Kenny Edwards, who works nearby.

Part of the discussion Tuesday night at their monthly neighborhood meeting was parking and what to do about it.

“It has gotten to a critical mass now to a point where it’s urgent. It’s not just a concern,” said Spiers

Spiers says construction on Mass Ave is becoming too much of a good thing.

It’s prompted the association to develop a parking committee. It will look at what’s causing the problem, where in the neighborhood the problem exists and when it is at its the worst.

“Some of it is absolutely self-inflicted and I think that’s what we have to look at as what part we play in this,” said Zach Adamson, City County Councilman.

Adamson is running against Spiers in his re-election bid.

“We’re not imposing any kind of guidelines on developers as they, especially when they receive enormous subsidies from the city, to create any component of public parking. There’s going to be a shortage regardless if we’re not making sure that these developments include public parking,” said Adamson.

Adamson said the city does have the power to impose parking guidelines on new development, but said they haven’t yet.

As for the association they say they’ll have a proposal from their parking committee next month on where to go from here.