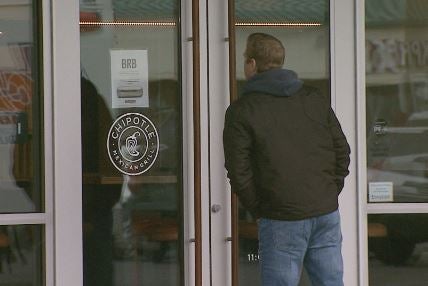 INDIANAPOLIS (WISH) – All Chipotle stores were back open late Monday afternoon after being closed for lunch.

The company closed all of its U.S. locations so all of its employees could undergo food safety training.

“I’m disappointed,” said Danielle Ray who went to to Chipotle for lunch, only to realize it was closed. “I mean I understand they need to take safety precautions, but I love Chipotle.”

About 500 people were sickened this year and last by the norovirus, salmonella and E. coli. All linked to the restaurant.

“When you look at food-borne illnesses in general, most of the time it has something to do with cooking and or the way it was processed,” said Dr. Mark Bochan, the director of Infectious Diseases at St. Vincent Hospital.

“As long as they take every precaution, I feel safe to eat here,” said Ray.

“People should go easy on Chipotle, I think they are a responsible company and I hope that they take care of all the issues they’ve been experiencing,” said Marvi Bikak who was on her way to Chipotle for lunch.

In Monday’s safety meeting with employees, the company announced its spending $10 million so local farmers can meet the company’s new safety procedures.

“Money will be used to provide safety support and education that’s necessary to meet our standards,” said Steve Ells, founder, chairman and co-CEO of Chipotle, while speaking to employees during the training session.

“With everything going on its probably the safest place you can eat right now,” said Misty Ashley, as she was found the door to Chipotle locked.

The CDC announced earlier this month that the E. coli outbreak  “appears to be over.” However, Chipotle said it still doesn’t know what caused the outbreak.