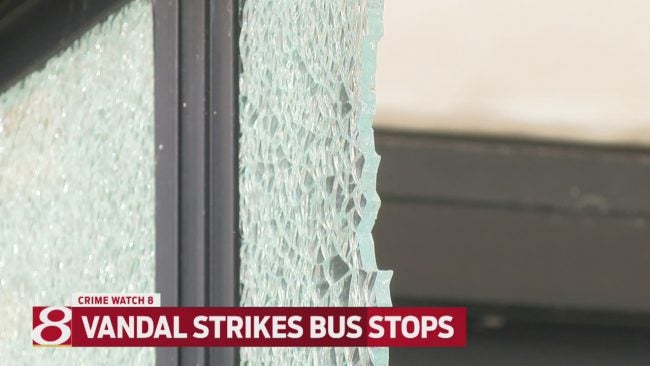 COLUMBUS, Ind. (WISH) — Police are trying to figure out who fired a pellet or BB gun at three Columbus bus stops and a downtown Columbus office this week.

A vandal broke the glass at bus shelters and shattered a window.

“I’m disappointed. It just upsets me that there are a few bad apples in our community,” Noel said.

Noel said he’s cleaned up after the shooter every day this week. He said someone shot at one east side bus stop on two separate occasions.

“If people see someone acting curious around anything, it doesn’t matter what it is, make a call and get it stopped,” he said.

The sounds of Second Street roared through the Columbus Republic newsroom Wednesday. Someone fired at the newspaper’s office early Wednesday morning and shattered a window, police said.

Officers said there could be more cases that no one reported.

“I was upset. I wondered, what happened,” bus rider Shirley Blair said.

Blair said she’s praying for two things: no rain when she waits for the bus and no more vandalism.

“You might say we’ve got sickos out here and that’s the way you have to describe them,” Blair said. “They’re sickos. They have no respect for anybody else.”

Noel said he’s worried a vandal will shoot again. If they do, he knows what he’ll be doing the next day.

“We’ll be right back here the next day, picking it right back up,” Noel said. “It’s all taxpayer’s money.”

ColumBUS workers said they’re still waiting for estimates on how much repairs will cost. Noel said ColumBUS might need to request additional from city leaders to cover the repairs.