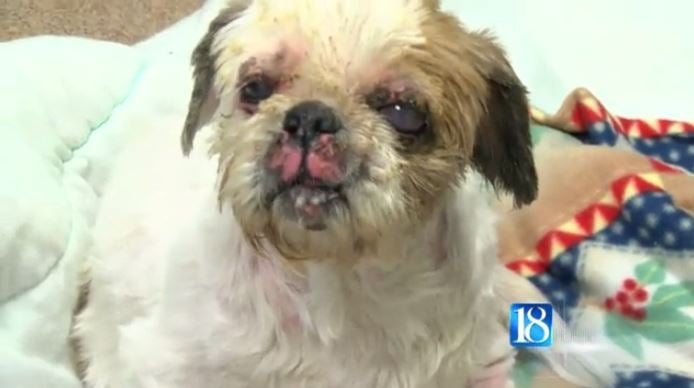 LAFAYETTE, Ind. (WLFI) – A dog that was found wandering and burned has new chance at life because of Good Samaritans.

As the dogs at the Almost Home Humane Society perked up for the News 18 cameras Monday, Dixie, a Shih Tzu in her teens, curled up for an afternoon nap.

“Some Good Samaritans found her wandering in Lafayette, knew that she appeared injured, so they brought her to us to try and figure out what was wrong,” said Stacy Rogers, Executive Director.

Rogers believes Dixie was blind and deaf before she was injured. Even so, she was brought in with several burn injuries and was having a hard time breathing. She was taken to Purdue’s Small Animal Clinic and had to be put in an oxygen cage.

“We knew that her bills were going to total about $2,000 because the oxygen therapy is fairly expensive there, so we sent out a fundraising fee to all of our supporters and posted it to our Facebook page and got a very fast response. We raised more than the $2,000 within the first 48 hours her story was up,” explained Rogers.

The humane society called fire departments to see if she went missing from a house fire, but nothing had been reported. They really don’t know how she was burned.

“We do know under her eye injury, she has some pretty significant cataracts, so whether she wandered into something that was burning because she couldn’t see it coming or if it was intentional, we’ll probably never have a good idea,” said Rogers.

Dixie is currently being fostered by a Purdue veterinarian student. Rogers said she still has several weeks of eye treatments before she can find a forever home.

The Almost Home Humane Society is gearing up for a fundraiser that helps dogs like Dixie. Strike Out Suffering, an annual bowlathon, will take place on March 5 at Landmark Lanes, formerly Star Lanes. Registration is $20 for each team or $25 with a T-shirt.

The goal is to raise $20,000 for the humane society’s injured pets fund. Some of those pets will be on hand to cheer on the teams.