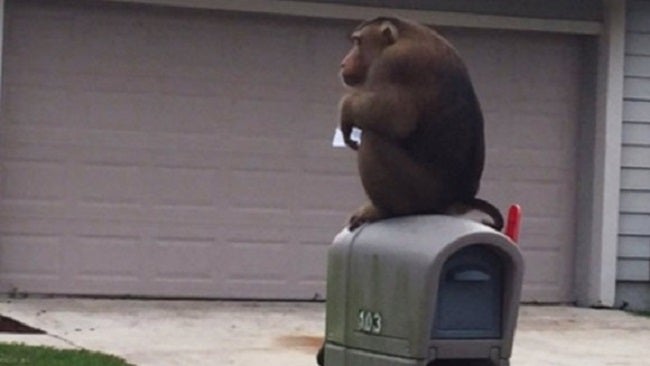 SANFORD, Fla. (WFLA)- An Orlando-area pet monkey had his 15 minutes of fame after apparently escaping from his owner on Monday morning.

Photos of the monkey popped up on Twitter shortly after people spotted him in a Sanford neighborhood.

The Sanford Police Department said that someone called shortly after 8 a.m. to report that a monkey was eating mail from a mailbox in the Hidden Lakes subdivision.

Police say after they responded to the scene, the monkey started pulling the molding off one of their patrol cars.

Police were able to distract the monkey with a bottle of water.

The monkey’s name is Zeek. Photos posted by the Sanford Police Department on the department’s facebook page show Zeek sitting on top of a mailbox with what looks to be mail in his hand. Other photos show Zeek sitting casually on a curb and drinking bottled water.

The Sanford Police Department also posted two videos of Zeek. One video shows him playing on a street sign. The other shows Zeek playing with an antenna on top of a police car.

Zeek’s morning of fun on the run did not last long. His owner came to pick him up after police responded.

Sanford is located north of Orlando and south of Deltona.