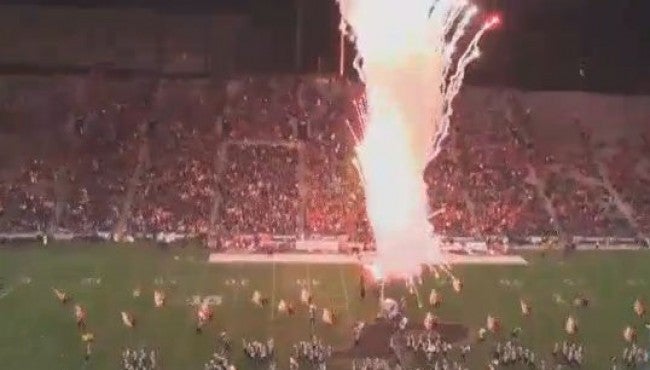 During the halftime performance, part of the fireworks went into the crowd. No one was hurt, but some students say the experience was alarming.

Brandon Lehn loves fireworks. “Fourth July is my favorite holiday so I like seeing them go up,” he said.

Which is what he and some of his friends saw at the Purdue-Nebraska game on Saturday. “I just saw the red ones go up and there were green ones that kinda headed toward the fan section. Everyone around me was kind of talking about it and how it was so strange and kind of a freak thing,” Lehn said.

The Facebook page, “Purdue Band Fans,” caught the performance and shared a video.

Zink said, “There were no injuries or complaints, and Purdue Bands will continue to follow the strict protocol in place as future displays are planned. I mean it’s always good to double-check.”

Lehn said he thinks this could have turned out much worse. “It was kinda smoky and I think I recall people kinda spreading out and being like ‘oh, gosh!'”

But he said he’s not surprised by the Purdue Bands’ statement. “I know if they’re going to launch those off,” Lehn said, “a lot of planning had to go into it, especially if they’re going to be launching them right next to the marching band with people there.”

Fry said he agrees with Lehn, too. “But I know that they put plenty of safety precautions in place to keep it safe and I don’t think this one incident would change that too much.”

Fry said he trusts the university puts a lot of time into planning each firework display.

Purdue Bands said they have a very strict protocol in place for their firework shows, but when asked for details on what exactly that looks like, there was no immediate response.