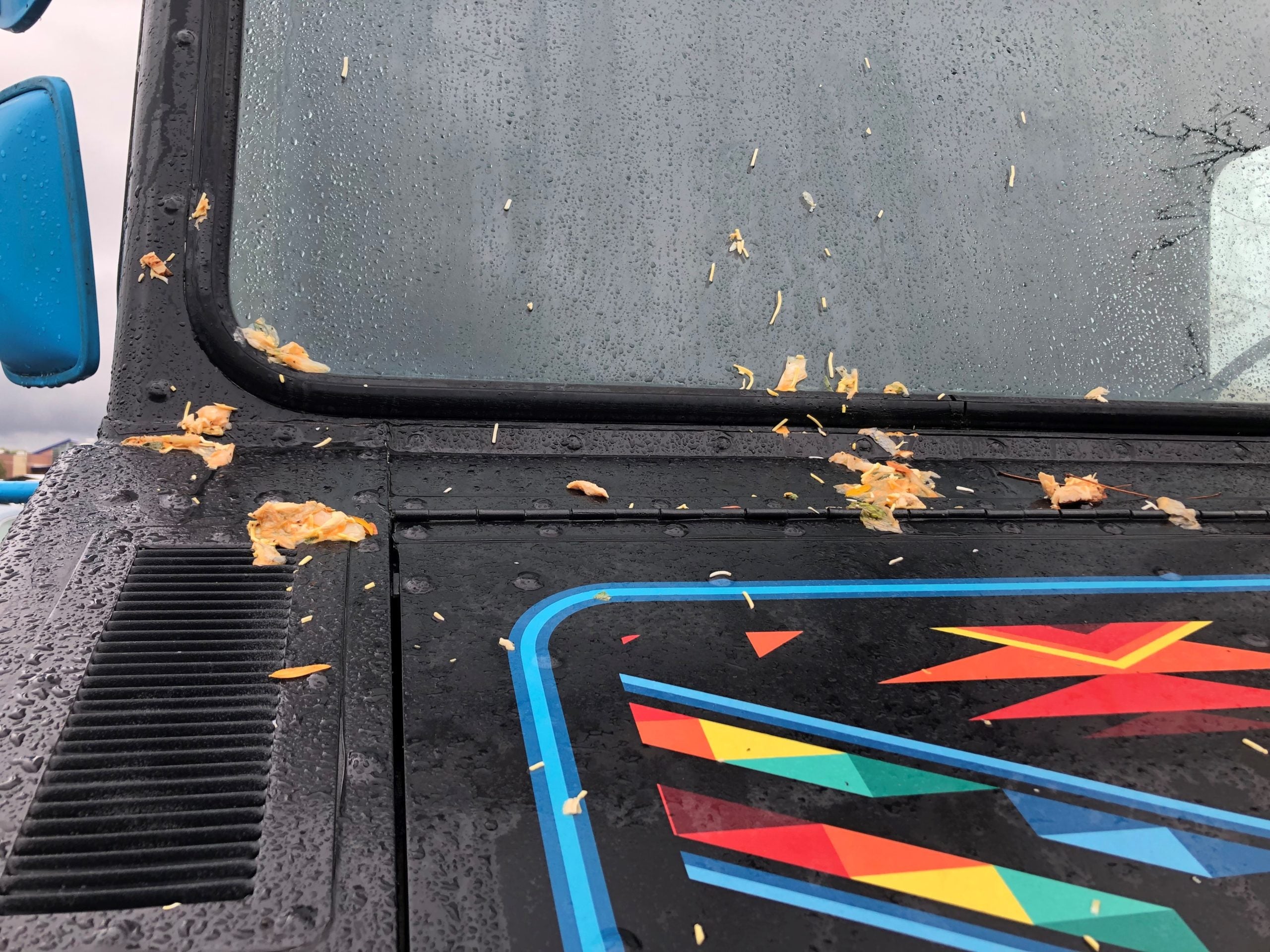 WEST LAFAYETTE, Ind. (WLFI) — A local food truck has shut down operations after a string of vandalism and break-ins.

Day after day, the owner of Traphouse Tacos showed up to his truck with it looking like a mess. Garrett Neuman reached out to WLFI when it happened.

For the past two years, Neuman has held a contract with Menards on U.S. 52 in West Lafayette to utilize the parking lot. He parked his truck in the same spot and served every day. He said it was a great spot to do business, up until a few weeks ago.

Neuman showed up to work one day and found his truck had been broken into.

“Somebody broke in and stole my cash register, the POS system and my ignition keys”

“I would’ve pulled the truck out and left before but they stole my ignition keys,” Neuman explained. “I’m waiting on a new ignition just to be able to leave. So I basically just have to endure it before I can move my truck.”

He wasn’t just robbed. As the days went by, the vandalism continued.

“We had somebody unplug the truck and that ruins my food that I have on the truck.”

Neuman explained that he couldn’t guarantee what time the refrigerators stopped running. In order to guarantee fresh food for customers, he had to throw it all away and replace everything.

The pranks continued. Neuman said for over a week, he would find something wrong with it every day.

“It started with Gatorade, there was a milkshake thrown against [the truck] last night [and] Caesar salad.”

Menard’s provided a surveillance image from the first night the truck was vandalized. Neuman explained what he saw on the video.

“A car sat out here from 3:00 in the morning to 5:15 or so. They tried to set my truck on fire, they burned papers underneath it.”

The image, listed below, is difficult to make out. Police say the parking lot gets so dark at night, and the only reason they caught anyone was because the car’s headlights were on. The other nights when the truck was vandalized, the person fled on foot.

Police say they have no leads of who it could have been. Neuman has no idea either.

“You can’t see the person, you can tell it’s a figure and you can see the car. At one point they’re sitting there with their headlights on my truck. For like an hour they sat that way.”

Sergeant Michael Brewer with the West Lafayette Police Department responded to Neuman’s call about the break-in.

“We spoke with police and filed a report. They’re doing patrols but obviously they can’t sit here all the time, so it continues to happen.”

Customers are concerned with the situation.

“I came by last Saturday to get something to eat and nobody was here and I saw that there was food splattered all over the front of the vehicle and food all over the ground,” said Thomas Campbell. “I’m like what happened?”

Campbell hopes police find whoever did it.

“I don’t know it seems kind of like something kids would do,” Campbell thought. “But breaking in and wrecking the ignition sounds a little more serious. So it could be competition or it could be punks.”

Neuman said he lost several thousands of dollars from the break-in, so he decided to shut down for good.

“It’s not fiscally responsible of me to continue doing this,” Neuman said.

Police said this is the first time the city has dealt with an issue on a food truck.

Neuman doesn’t understand why this happened to him. He believes his truck is well-liked by the community.

“People come over here and tell us how good our food is and how they’re happy we’re open and wish we were open more. I have no idea what I’ve done to cause this.”

Sgt. Brewer said the only damage to the truck is the window where it was pried open the night of the break-in.

Neuman closed the truck two weekends ago. He told said he’s working to open a brick and mortar somewhere in town.

There’s no confirmation when that will happen.