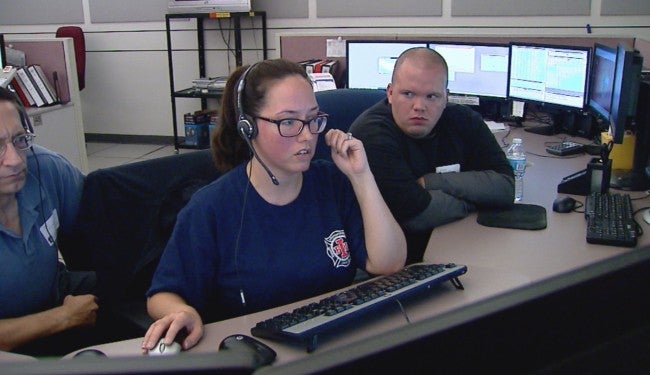 24-Hour News 8 Anchor Phil Sanchez is taking classes as part of the Citizens Academy. This is one of a series of blogs about his experience.

I’ve been to a number of crime scenes – some of the worst in the city. I’ve covered numerous fires and have interviewed dozens of cops and firefighters. I respect what they do day in and day out to keep us safe. That’s why I decided to sign up to be a part of the Citizens Academy.

It’s a free class anyone can sign up for and get the same hands-on training from police, firefighters and EMS.

The 10-week course is designed to bridge the gap between the people who live in the community and the folks protecting the community. But as I found out, fighting crime is a tough job and it takes more than a Department of Public Safety. It takes a whole community.

On night one, we learned the basics: a lesson on who’s who in the department of public safety.

“So it’s (a) two-way street. We’re going to learn as much from you guys as you do us,” one IMPD officer said addressing the class.

We were given a binder with a lot paperwork, questions and answers. It included information on what we were getting ourselves into, and on what the folks in the department of public safety get themselves into every day.

“They’re going to actually have to think through problems that our police, fire and EMS have to do. They’re going to experience some of the anxieties they have. And find out how the training gets them prepared to answer the emergencies that they might be calling in on,” interim Public Safety Director David Wantz said.

And when you dial 911, the call goes to the 911 center. We took a tour and the phones rang non-stop. On the other end of the phone is a person who is quite possibly living through their most frantic moment.

I asked one dispatcher about the worst call she ever had.

“The worst call … always has to do with children, those are always the worst calls. People call, their baby’s not breathing,” she said, adding she then has to walk them through CPR.

She also said sometimes it’s not successful, and then the phone will ring again. Calling their job stressful doesn’t do it justice.

“It’s always heartbreaking when it’s a child like that,” she added.

I would agree, often when a child is injured or dies, we in the media are sent to the scene. We try to bring the information to the public, but it’s never fun speaking to a mother or father who lost a child.

Taking the class with me is Ted Feeney, the head of the Butler Tarkington Neighborhood Association.

“It’s a good way to learn more about what they do, and pass along information to residents of the neighborhood.” Feeney said. “From sitting and sort of watching what our first responders do, it’s very impressive and just proud to be a part of this.”

We are too, and we will continue to be a part of it. The goal? To make Indianapolis safer. And we here at WISH-TV want to help.