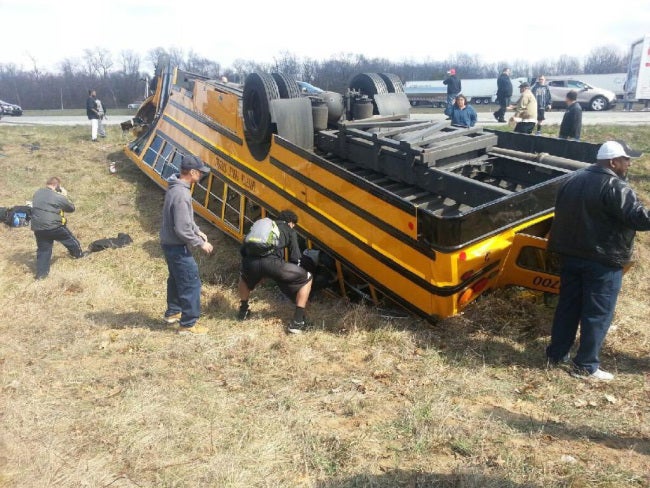 The community has shown overwhelming support for the Griffith boys basketball team after they survived a rollover crash on their way to semi-state match-up this weekend.

It was an emotional experience for the team and those close to the players, but the whole community came together Wednesday to make sure the team’s journey was comfortable.

The team rode in style after the community donated a charter bus and the police department volunteered to escort them out of town.

“Happy to do it, we’re part of a community,” Griffith Police Cmdr. Keith Martin said. “Griffith is a great community. It’s a sports community, it’s an academic community. We’re a tight community and everybody supports everybody.”

Their support was comforting not just for the players, but their parents too. The last time David Dye’s son Jake got on a bus with the team it flipped over and landed in a ditch.

“Still not over that, still wake up every morning at like 3:30,” Dye explained. “Ugh, what could have happened?”

All 27 passengers were sent to the hospital, but luckily none with life-threatening injuries.

“Just his shoulders, he said, are sore,” Dye said. “And I think that’s from falling to the ground to ceiling.”

It’s been a rough two seasons for the Griffith Panthers. Last year they were punished for getting involved in a fight during a game, and this year the bus crash.

However, Dye said that just means this team can get through anything.

“After this, everyone else got to see that, he said. “They’re just kids and, you know, they made one bad mistake and now they’re showing people how to act and the right way to go. So it’s kind of nice.”

Dye said the game has been a good distraction from the accident and has brought the team closer together. They’ve been preparing all week physically and spiritually. Dye said a line at one of the team prayer services really stuck with him.

Griffith faces Marion in the Class 3A semifinal at 6 p.m. If they win Wednesday night, the Panthers head to the finals on Saturday.