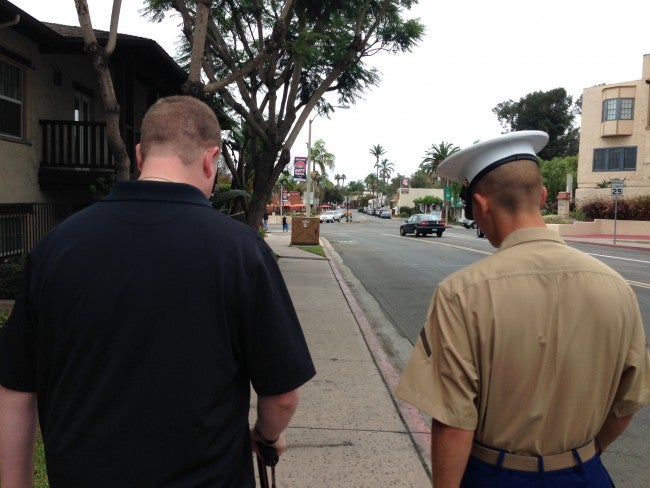 BLOOMINGTON, Ind. (WISH) – A central Indiana woman is working to raise awareness about those who care for service members and veterans after they come home.

5.5 million Americans are military and veteran caregivers, according to a study done by the RAND Corporation for the Elizabeth Dole Foundation. The study found more than a million caregivers care for service members who have served since September 11, 2001.

Jennifer Mackinday’s brother, James Smith, was wounded by an IED in Mosul, Iraq in 2005. He suffered a traumatic brain injury, post-traumatic stress disorder, damage to his spine, among other injuries.

“We spent years in medical facilities, dealing with the Army, the VA, civilian providers, to try to get him all the care he needed to help him recover,” said Mackinday.

“It’s been a long road,” said Smith. “It’s something you never get over, you just keep working at it.”

“Ask for help if you need it,” Smith added. “There is no shame in asking for help. Especially from someone you know, like a sister, mom, family member. There’s no shame in asking for help. It’s probably one of the hardest things to do initially because you’re so reliant on yourself for a long time that you really don’t see the need for help maybe at first. But I definitely wouldn’t be here without Jen.”

Mackinday became her brother’s full-time caregiver, leaving her job to make sure James had the support he needed.

“I am so proud of how hard my brother has worked to recover,” said Mackinday. “I am only a successful caregiver because he is such wonderful brother and worked so hard in his therapy and all the things he’s had to do over last decade since he was wounded. That’s indicative of who our service members are, whether they’re wounded ill or injured, they’re strong people and they have strong families. Strong people often don’t ask for help when they need it. It’s important for the public to know they can take the extra step by offering that help.”

Mackinday and Smith eventually found an independence program for Smith through the Wounded Warrior Project, which allowed Mackinday more time for herself. But after years of being out of the workforce, she said she wasn’t sure where to start to get back in.

Mackinday first found help through the Indianapolis-based non-profit Operation Job-Ready Veterans. She now is a national spokesperson for the Wounded Warrior Project, and works with the Elizabeth Dole Foundation to encourage Congress to pass laws to give more support and services for military caregivers.

“The biggest hurdle is that caregivers are really hidden heroes. They don’t want to self-identify themselves as people who are doing the heavy lifting, who are making sacrifices in own lives, whether it be their career or personal time,” said Mackinday.

“I actually wasn’t aware all those years I was by myself, that there are over 5 million caregivers in the United States, and over a million care for someone in Iraq or Afghanistan. Those are huge numbers,” she added.

Mackinday said a lot of people are caregivers and don’t know it. If your parent served or your spouse, you also are a caregiver, and there are resources out there for you. You can find more information on the Elizabeth Dole Foundation, here.

Veterans or families of veterans of any era can contact the Wounded Warrior Project here, or by contacting the WWP Resource Center at resourcecenter@woundedwarriorproject.org or at 888-WWP-ALUM 888-997-2586.