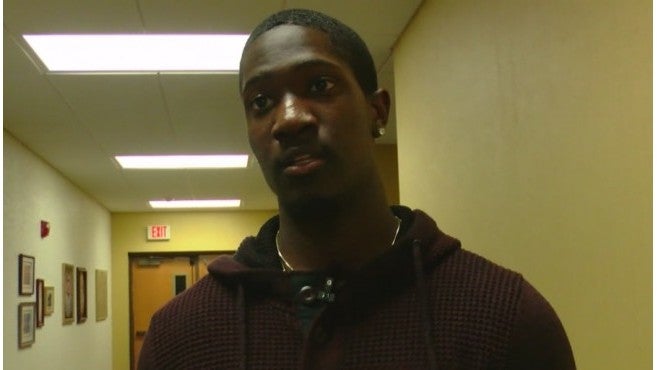 INDIANAPOLIS (WISH) — An Indianapolis high school senior is being honored nationally for his work to put an end to gun violence.

Brandon Warren was one of ten national honorees for youth volunteering through the Prudential Spirit of Community Awards.

Warren was selected out of 29,000 applicants. That’s about a .0003 percent chance of getting this honor.

About a year ago, Warren’s heart broke. His friend Dijon Anderson died in a shooting.

“Fell out of my bed. Thinking how, why, what? I wanted answers right then,” Warren said.

He decided no one should feel the pain he felt. It was the seed to his movement, We LIVE Inc. to stop the violence.

He speaks to youth at churches, like Tuesday night. He organized a march in August, from the route, to getting sponsors, to bringing in speakers, on top of the busy life of a Warren Central High School senior.

“Balancing this, school, athletics, it’s been the hardest year of my life while still grieving,” said Warren.

Hundreds came out in August for that rally. And then in the wake of the Parkland shooting, Warren did it again. He helped launch the local March for our Lives rally.

“This isn’t about just school shootings. This is about all youth violence,” Warren explained.

Every year, Prudential honors students around the country for their activism. What do they want to see? Initiative, effort, impact, personal growth.

Warren decided to apply. In Washington, D.C. on Monday, he learned he was not only a state winner, but also a national honoree.

“It was a very emotional moment. Every accolade I win, I think of Dijon. That’s my friend that I lost,” said Warren.

Warren received a $5,000 award and another $5,000 to go to a charity of his choice. And to Warren, off to Eastern Kentucky University in the fall, the work is only beginning.

“I expect this to be throughout the nation in the years to come,” he said, adding that high schoolers will continue the movement while he is at college.

Warren landed from Washington, D.C. at 7 p.m. Tuesday night. Just after 8 p.m., he was speaking at a church about his movement to get more youth involved.

He said he was starting to lose hope in his movement because on Friday another one of his friends was killed in a shooting.This award has given in renewed hope that he’s making a difference.

If you want to get involved in the We LIVE Inc. movement, click here.