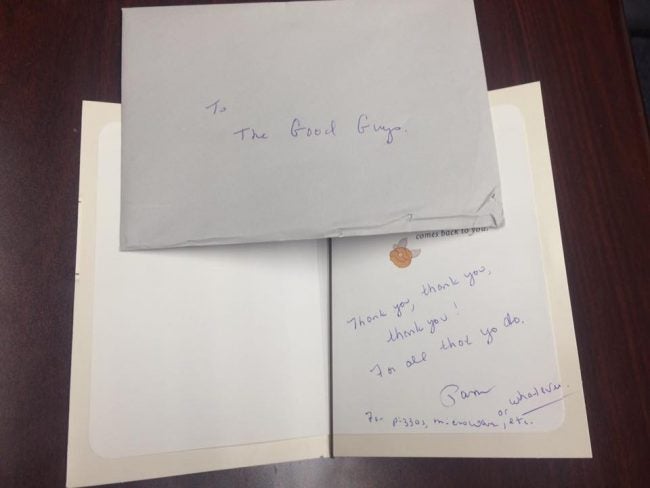 INDIANAPOLIS (WISH) — Northwest District officers with the Indianapolis Metropolitan Police Department were surprised with a kind gift Wednesday night. Someone left a card with cash inside it, just to say thank you.

A woman named Pam left the card in front of the main doors at the Northwest District Headquarters. Now, police would like to say thank you for the kindness.

“For one, the envelope says ‘For the good guys’ on the front of it, that was really cool,” IMPD Commander Michael Jefferson said, “And then it says ‘thank you for all you do, for pizza or for whatever’ so it was very nice.”

A greeting card with that message and $150 in cash was left sometime Wednesday night.

“They didn’t want a bunch of accolades or whatever it was just something really nice,” he said.

The card was signed with only a first name.

“It’s got a name and it looks like Pam,” he said, “And nobody knows who that is.”

Jefferson wants the mystery woman to know that her donation will go directly back to the officers she was looking to thank.

“We do what’s called an Officer of the Month, we try to praise them for doing good work,” he said, “That money will go directly to buying those gift cards and a gift card is rewarded once a month, so that’ll last us for a few months.”

While the gift was monetary, Jefferson said the thought is priceless after the tough summer for police in the U.S., including in Indianapolis.

Bullet holes still mar the brick outside his district office from a targeted shooting last month.

“If nothing else to shake her hand and give her a hug and say, hey thank you, we appreciate your support,” he said.

If she wants to remain out of the spotlight, he wants her to know they are grateful.