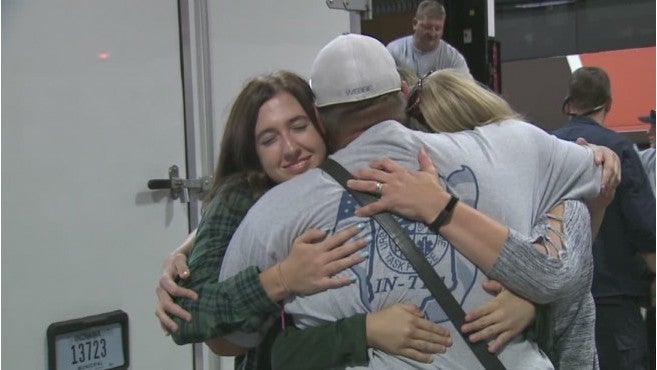 INDIANAPOLIS (WISH) — Members of Indiana Task Force 1 were back home Friday night after more than a week in North Carolina helping in the aftermath of Hurricane Florence.

“It was probably easily the most work out of the hurricanes besides Katrina and Sandy. I think it’s the one hurricane that we have probably done the most rescues,” said Jay Settergren, a leader with Task Force 1.

The group was stationed in Wilmington, North Carolina, a city that took the brunt of Hurricane Florence’s wrath.

Settergren said the deployment was one of the most dangerous in the Task Force’s recent history.

“What really got us were where we did all of our active rescues,” Settergren said. “Which was in the flash flooding after the storm came through and the long periods of rain. I have never ever seen it rain that hard in my life. As quickly as that flash flooding happened was, it was just amazing to me. I’ve never witnessed that before. That’s something that will stick in my mind and how quickly conditions changed.”

The team performed more than 100 water rescues while there.

“Once it got dark, people weren’t able to gauge how quickly the water was coming up and that’s what was trapping them,” Settergren said. “Not only was it coming up, it was moving water. We had thunderstorms in the area and we had three tornadoes that night. So, we were very stressed, very hard worked, we moved almost all of those rescues were done in that first 24-36 hour period.”

“I would go out with these folks again anytime,” Settergren said. “Extremely good group of people, extremely hard working people. Did not stop and did not want to stop.”

“Obviously, we can’t put the dogs in a swift water situation,” said canine specialist Janalee Gallagher. “Fortunately, there were other uses for the dogs in this instance. Honestly, we did a lot of therapy work. When we were pulling evacuees and rescuees onto the trucks, they served a completely different purpose.”

For Indianapolis firefighter Tim Lavin, the deployment hit close to home, and turned into a moment he said he will never forget.

“The last day there, we went to a local firefighter’s house that had 2-3 feet of water in his house,” said Lavin. “We helped him gut his house. To see somebody that’s one of us and works the same schedule as us to lose everything and see everybody else, all their possessions are in trash bags.”

The work done by Indiana Task Force 1 received a lot of praise in recent days. The New York Times featured the group in a recent video of Hurricane Florence on its website.

On Friday morning, Wilmington’s Fire Department tweeted about Task Force 1 and thanked it for its help: “Thank you from the bottom of our hearts. You guys are amazing!”