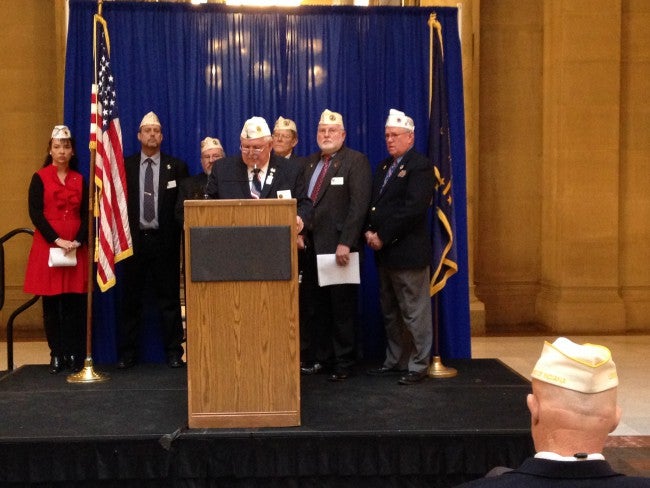 INDIANAPOLIS (WISH) — Indiana ranks 50th in terms of the quality of life for military retirees, according to a recent survey.

It’s why the leaders of four veterans groups were at the Statehouse asking for help Friday.

Most veterans benefits come from the federal government but four Indiana veterans organizations still believe that state lawmakers can do more to help them.

A large number of the military retirees in Indiana served in the National Guard and, as a result, many don’t legally qualify as veterans. The federal definition of a veteran requires 180 consecutive days on active duty.

“They served 75 days, they’ve served 179 days, come home for a week, gone back and done it again,” said Rep. Peggy Mayfield (R-Martinsville). “They can do that for decades and never be considered a veteran.”

That means they miss out on opportunities that go to veteran-owned businesses and where veterans receive preference.

It’s why Rep. Mayfield has a bill that would define a veteran as anyone who served and was honorably discharged.

And they want a bigger veterans relief fund.

“I think that there’s an assumption that they’re all being taken care of,” she said, “and in reality they’re not.”

Her Hoosier veteran bill is up for a vote in the Indiana House next week.

A spokesman for the state Department of Veterans Services points out that staff and funding in that agency have doubled under the Pence Administration.

He declined comment on the demands made by veterans and said the governor will leave it up to lawmakers to determine what happens next.

by: Annessa Chumbley / 29 mins ago