Indy Flintstones reflect on water delivery to hometown of Flint 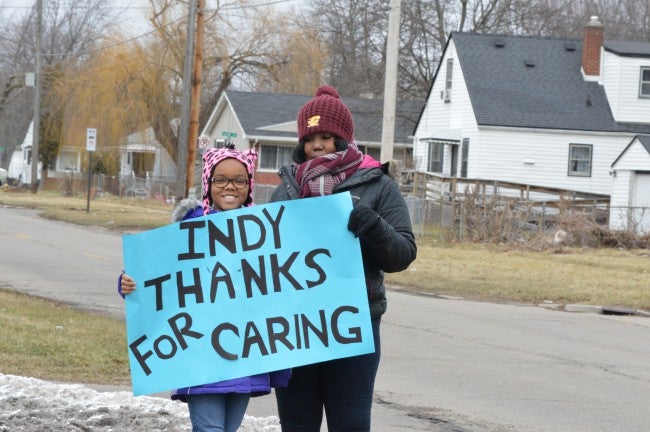 INDIANAPOLIS (WISH) — During a bottled water drive in Indianapolis, the Indy “Flintstones” far surpassed their goal and collected tons of bottled water.

The group is made up of families from Flint, Michigan who live in Indianapolis and who are trying to help their hometown during the water crisis.

The group gathered four semi truck loads of bottled water and just returned from a delivery. The families said they raised much more than they anticipated.

“It just feels surreal like you’re in a third world country a little bit to see people having to get in line for basic needs,” Indy Flintstone Erika Redmond said.

They said handing those cases of water to the residents of Flint was both rewarding and humbling.

“When we got up there and we really saw lines backed up down the street for water it hits hard that these people really need assistance,” Indy Flintstone Edreece Redmond said.

The Redmond’s and Randle’s shared what it was like handing out the water to residents.

“We’ve seen on social media that there have been long lines but I think to just witness it first hand was a bit shocking,” Erika said.

Edreece said they had four semis full of water to unload.

“(The) first two and a half semis I think we went through in the first hour,” Edreece said.

It only took one afternoon to empty the trucks before the group had to start turning people away.

“Our impact was great, but there’s still a great need up there,” Edreece Redmond said.

Because of the water crisis, the people of Flint are totally dependent on bottled water.

“They’re brushing their teeth with it, they’re bathing with it, everything you could think of or imagine that you need to use water for that’s what they’re using the bottled water for,” Edreece said.

“Our four cases we were giving them may have been enough for that day, depending on the size of the family,” Randle said.

They’re grateful for Indianapolis’ generosity in donating the cases of water. They are also glad they made a difference.

Erika said she wants to see a more permanent solution.

“Just looking forward to the root cause being addressed and we don’t know when that’s going to be, but until then, we’re there to support our hometown,” she said.

They have another two semi truck loads of donated water that will be sent to Flint soon.

If you’d like to donate, they are still taking donations at Tinley School on the city’s west side.