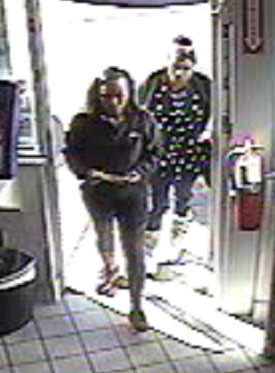 According to ISP, the suspects in the case are alleged to have broken into nine vehicles inside a Washington Street parking garage between 9 a.m. and 10 a.m. on Nov. 5. After the break-ins, the suspects are thought to have stolen credit cards which have been used to make purchases at a gas station and a shoe store.

The suspects were recently caught on surveillance camera at the Speedway gas station in the 3500 block of West 30th Street. Police said a stolen credit card was used to buy gas. One the same day of the fraudulent gas purchase, the credit cards were also used at the Foot Locker at the Lafayette Square Mall.

The suspects have also been spotted in an older four-door passenger car and a dark-colored pickup.

Anyone who recognizes the individuals in the photo or has any information on the case is asked to contact Crime Stoppers at 317-262-8477.