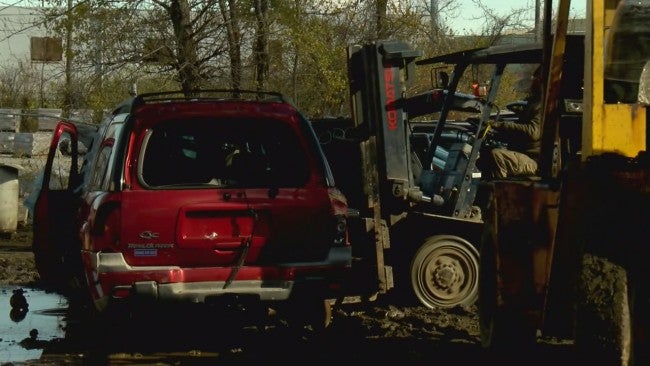 INDIANAPOLIS (WISH) — Police say someone stole thousands of dollars worth of items from a junkyard, and after being hit at least six times in just a few months, the owners are fed up.

It happened on the 3000 block of Stanley Avenue on the city’s south side.

Those owners set up surveillance and although they don’t have footage of the suspects stealing, they do have video from Wednesday of several people surveying their lot after hours.

Like any business, New Country Auto Parts is just trying to earn a dollar.

“To run a business is expensive, and if you can’t cover the cost because you have a horrendous burglary problem,” said inventory manager Derrick Glass.

An incident on Wednesday night was captured by surveillance cameras. In one video, you see a person looking around. He leans down to touch something, then walks away. In the next video, you see three individuals, one carrying a shovel. All of them wore hoodies.

Glass doesn’t believe anything was stolen during Wednesday’s incident. Instead, he believes they were just casing the area.

But last night’s incident isn’t the first time that this junkyard has been targeted. According to Glass, this has been ongoing for the past four months. He says there are similarities between each case.

“We’re really confident there’s at least one person that seems, like, very similar in all of our videos. It seems like one guy keeps reappearing,” said Glass.

Neither Glass nor police can confirm that those in the video are responsible for the thefts. Glass says thieves stole thousands of dollars worth of aluminum rims, light weight parts like batteries and starters and even two cars. He says one was recovered, but had been badly burned. The other has not been accounted for.

“That was a ride-and-drive car they broke through our fence and drove it right out of here,” Glass continued, “It hurts. We definitely feel it.”

This is still under investigation. If you believe your recognize any of the individuals in the video, or have any information that could help authorities in this investigation, contact Crime Stoppers at 317-262-8477.