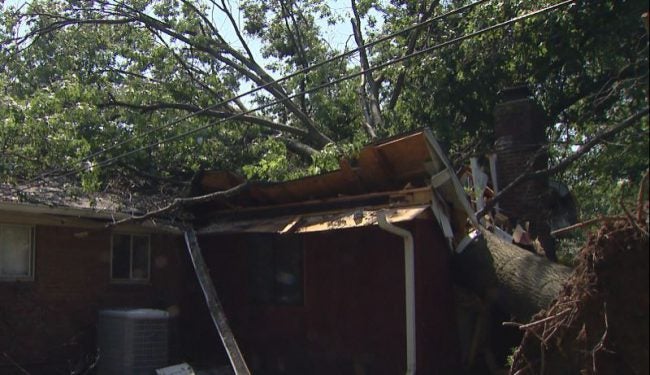 INDIANAPOLIS (WISH) — Many Indianapolis residents were taking shelter inside their homes as storms passed through Friday morning.

But one family in the 6000 block of Winnpenny Lane, near Binford Boulevard and Kessler Avenue, was inside their home as the storm hit their house.

In the family room is where Arthur Williams sat as he read a book on the gospel. He says something divine prompted him to get up, and so he did.

He almost made it out of the family room when, “Something hit me in the head. It’s like, really hard and it was just like the pressure from the wall just imploding and everything just come down and it just shot me — pushed me right into the dining room.”

The family room was destroyed after a large tree came crashing down. Williams is only in town by chance, visiting his sister and brother in law, who are both blind.

“I would’ve really felt bad if my sister would’ve been here by herself,” he said.

Ron Brown can’t see the damage to his home, but he knows it’s there.

The tree left behind a giant crater where it had once been rooted.

“I’d prefer to have it in my yard, but things happen,” he said.

And despite the mess, they are grateful the situation wasn’t worse.

“Blessed, not fortunate,” Williams said. “Just blessed that God moved in my life and just told me to get up and move.”

There were no serious injuries reported. Next for the Browns will be removing the tree and debris from their yard. Cleanup will follow. They will be staying with family in the meantime.