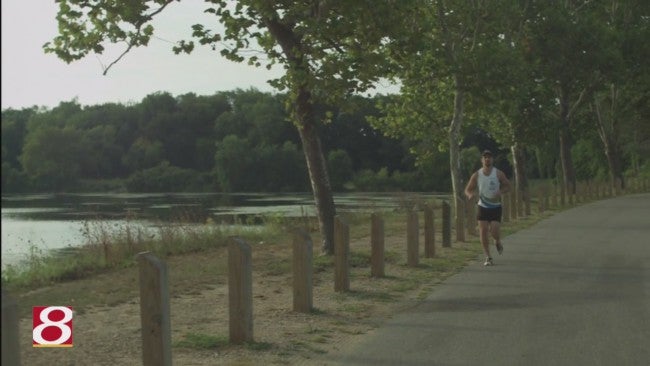 INDIANAPOLIS (WISH) – An Ohio man is running across the country to raise money for communities without clean water. His goal is to run 100 marathons in 100 days. His run on the 75th day took him to the Indianapolis area.

Daren Wendell’s journey started two months ago in southern California. Now more than 2,000 miles later, the run to raise money for people in Ethiopia isn’t over just yet.

With his wife and a couple of friends by his side, Wendell is close to reaching his goal.

“You get up and do the exact same thing every day,” said Wendell. “It’s just a different part of the country. A lot of times with different people.”

The 33-year-old has been living out of an RV these past couple of months as he continues his run across America.

“We’ve been through the desert; through the Mojave Desert, New Mexico, Arizona, and a lot of desolated places,” said Wendell. “So it’s actually nice to be back here in the Midwest, where I’m from.”

Wendell is the co-founder of Active Water, an organization that brings together runners and cyclists with one mission in mind: to raise money for people without safe and clean water.

“He’s always been just chasing after endurance events and trying to use that as a platform to do good for others,” said Danielle Wendell, Daren’s wife.

Danielle has been with her husband from the start.

She said seeing his progress after every run makes it all worthwhile.

“Just to see him finishing even though I know he’s in pain and I know he’s been hurting and he’s gone through so much in the beginning,” said Danielle.

It hasn’t been an easy journey, but Daren is hoping it will inspire others to make a difference.

“I don’t expect others to do things that I’m not willing to do myself that’s why I’m out here running and hopefully inspiring others to use what gifts they have to help others in need, whether it’s the water crisis or not,” said Wendell.

Wendell still has about a month to go until he makes it to the finish line in New York City. If you do the math, that’s roughly 700 more miles.

Wendell said a group of up to 20 local runners will be joining him Tuesday morning. They will be running from Plainfield to Greenfield.

Watch #Daybreak8 on WISH-TV at 7 & 8 today for more on Daren’s journey.