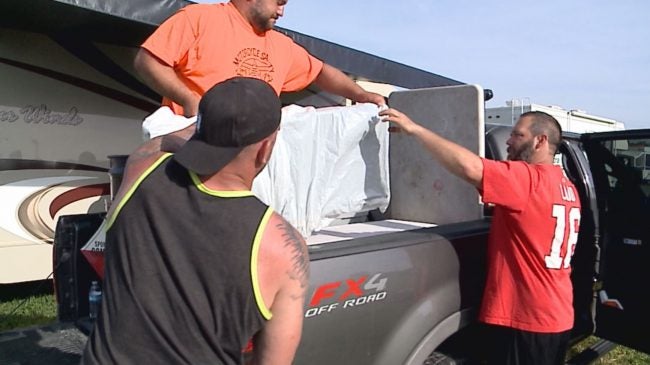 SPEEDWAY, Ind. (WISH) – Crews spent much of their Memorial Day cleaning up the remnants left behind by 350,000 race fans.

That includes the mess left behind by campers at the former Coke Lot.

“The Indy 500 is a different style of race,” said Fred McRae, who camped at the lot since Thursday. “The weekend was absolutely amazing.”

“It was just crazy parties, bonfires, people drinking, eating, congregating, having a good time,” said Andris Bendicks, who came to the race from Chicago.

The good time was had in the track, outside the track on Speedway’s Main Street, and in the former Coke Lot.

The group we caught up with travels to the race every year from Chicago. They were among the final campers to leave.

And while not as glamorous as glamping, they weren’t exactly slumming it. They woke up to freshly made cappuccinos everyday.

“We came prepared. We had plenty of supplies,” said Bendicks.

“It’s a group effort,” said Dennis Nee, another camper. “Probably about ten of us get together and we all do our own part. Meat, beer and beards. That’s our thing. That’s what we do.”

The group said they deep-fried a turkey, made ribs, pork shoulder and had biscuits and gravy for breakfast.

They say they will be back for next year’s race.