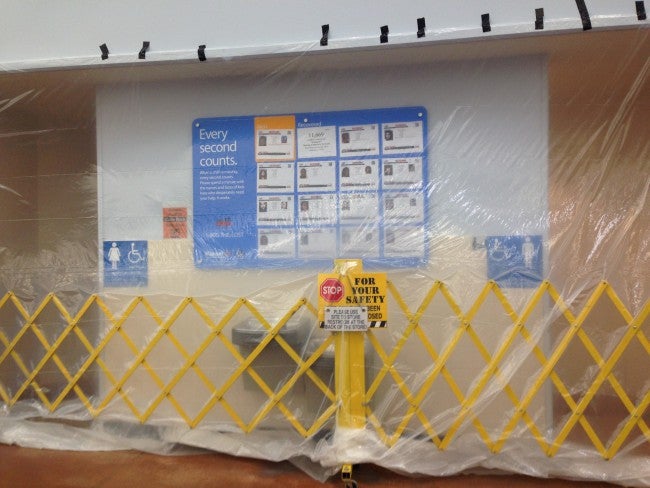 MUNCIE, Ind. (WISH) – Bathrooms at a Muncie Wal-Mart on the city’s south side remain closed after an active meth lab was found inside late Thursday night tucked away in a backpack.

According to Brian Nick, National Media Relations Director for Wal-Mart, it was a store security employee who noticed the man with the backpack acting suspiciously. She notified police inside the store who went after him, only to find the man had disappeared but left the backpack behind in the men’s room in the front of the store.

The Pendleton District of the Meth Suppression Team was called and went in with protective respirators and suits to dismantle the lab and remove the chemicals from the store.

“All the law abiding citizens you know, they try to keep it good but, you know, drug addicts and thieves they know how to do it,” Toby King said. “It’s crazy. People will find one way or another.”

Indiana State Police say it’s becoming more common for meth dealers to leave labs in public places to cook rather than risk explosions or contamination at their own homes. But according to Muncie narcotics officer Scott O’Dell, this is the first time an active lab has been found in a public place in town. He said the bigger problem in the area is abandoned homes being used.

The bathrooms were closed down by the Delaware County Health Department after a Drano like substance spilled on the floor. They will remain closed until a private hazardous materials unit they’ve hired can decontaminate the area. The store itself remains open and the stream of shoppers remains steady.

“You have to shop, you have to buy groceries and things,” said Beverly Spurlock. “They have it all taped off with plastic and stuff so I feel safe.”

Wal-Mart has turned over surveillance video of the man to state police and hope it will help in the investigation and lead to an arrest.

Police stressed that shoppers were never in harms way.