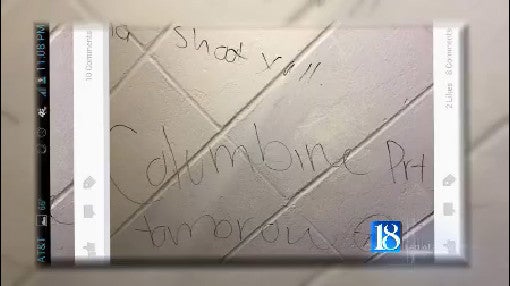 WISH-TV’s sister station WLFI spoke with one mother who said she kept her daughter home because she didn’t want to take any chances. With nearly one out of every three students absent Tuesday, she wasn’t the only parent to take action.

“This is the post, why I decided not to send my daughter to school today,” said Jessica Ortiz, mother of Jeff High School student.

Like many Jeff High School parents, Ortiz had to find out on Facebook about a gun threat written on the girl’s bathroom wall on Monday. The threat claimed there would be a shooting at the school at 10:30 a.m. on Tuesday.

“There was no email, no text, no nothing about any of this going on,” Ortiz said.

“We know once something like that goes out, if the information is not understood 100 percent, it can cause undue panic and that’s not something we wanted,” Huddle explained.

But panic is exactly what Ortiz felt when she found out through social media, and she said parents have a right to know.

“Whether it was a legitimate threat or not, I was not going to take that risk,” Ortiz said.

Her daughter was reluctant to stay home on Tuesday, saying she didn’t want her friends to go alone.

“I’ve been texting my friends to see if anything’s happened, and if they’re OK,” said Ortiz. “And I’ve just been hoping that nothing is going to happen and that everybody’s safe, but in this world you never know now.”

Huddle says they increased security on Tuesday and are working with police to review security cameras.

“They’re basically in every hallway so you can see who goes into what rooms, at what time, so we are kind of putting all those things together right now,” said Huddle.

Ortiz hopes they find the person who made the threat soon.

“We can’t be sending our kids to school and expecting them to get a great education with this on their mind,” Ortiz expressed.

Huddle said he’s working with Lafayette Jeff High School to see if Tuesday’s absences will be excused under the circumstances.

“That will be part of our conversation, those parents will be notified once that decision is made,” said Huddle.

But excused or unexcused, Ortiz said she’s unsure when she will send her child back to school.

“I know I need to because of her grades,” said Ortiz. “But at the same time, what about her well-being?”

Ortiz hopes the school will alert parents if these threats happen again.

Huddle said that’s something they will discuss in their next review in the near future.

We Stand Together / 42 mins ago