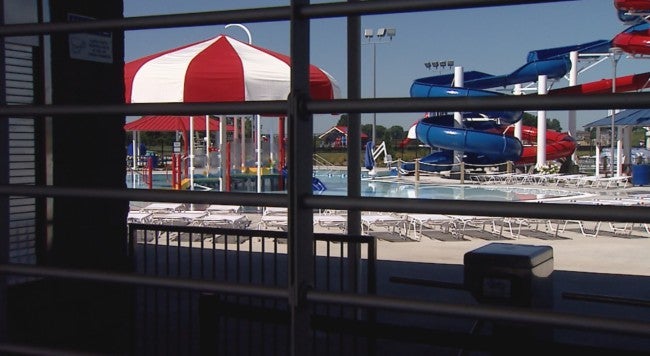 Many families showed up to the Freedom Springs Aquatic Center in Greenwood but were turned away.

Freedom Springs will now be closed during the day Monday through Friday. It’ll have regular weekend hours.

City leaders blame a shortage of lifeguards. The city’s temporary fix is to have evening hours, from 5 p.m. to 10 p.m. on Tuesday and Thursday.

Beyond the close gates is an aquatic center, no speeding down the slides or splashing in the pool. But there are plenty of empty lawn chairs and a “closed” sign greeted visitors looking for some fun in the sun.

“I mean, I understand. Disappointed,” said Jackie Mock, who brought her daughter.

Nancy Meadows tagged along and said, “It never occurred to us that it wouldn’t be opened.”

The new hours put a damper on the day, especially for season pass holders like Tom Lorocco. He’s visited the pool about eight or nine times since it opened in May.

“You want it for the whole season. This scaled down thing is ridiculous,” said Lorocco.

“They go back to Franklin Schools next week. We were thinking we’d spend the whole day at the water park. But it’s okay. We’ll be back at five,” said Burdine.

City officials say most of their lifeguards are area high school students who are on the balanced calendar. Some headed back to school on Thursday, others will head back next week.

For next year, Mayor Myers says they hope to hire some older guards who can stay through the entire season.

“We’ve got some negative going on right now, but there have been so many positives. This is the first year. it’s a learning experience. We’ll just take everything that we learn and try and put it together for something better for next year,” said Mayor Myers.

Out of town guests who visited the aquatic center were given free passes to attend another day. Mayor Myers says the hour change was fully disclosed on Freedom Springs’ website at the beginning of the season. Other area pools like Carmel and Plainfield will also cut their hours before the season’s end.