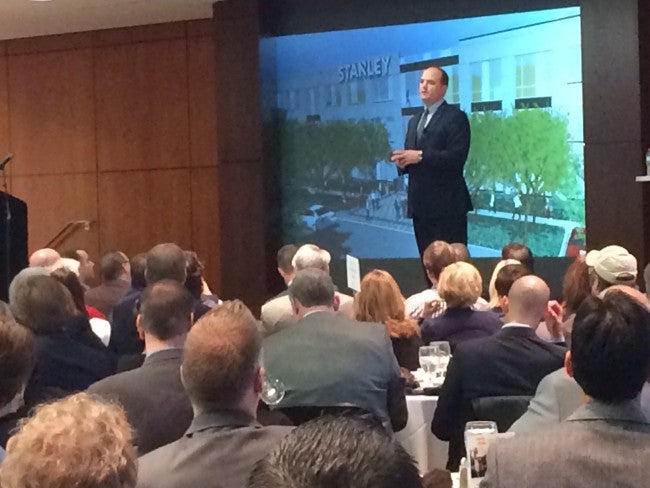 FISHERS, Ind. (WISH) – Less than two months into 2016, the city of Fishers has already announced more jobs coming to the city than all of last year.

In front of a sold out OneZone chamber luncheon, Fishers Mayor Scott Fadness made the announcement during his second state of the city.

“We’re working hard, we’re executing upon that vision, and I think people are starting to notice and there’s real momentum happening our city,” Mayor Fadness said.

Stanley Security plans to build a $16 million facility near 106th Street. The facility will bring in 300 jobs.

Braden Business Systems plans to construct a $6 million facility by city hall. It will move its 70 current employees, and hire 90 more within the next four years. Company executives say Fishers is the ideal relocation spot.

“We want to be part of the community, part of the growth, part of the excitement,” Braden Business Systems President Dave Braden said. “We really like the urban feel of downtown.”

Mayor Fadness also announced a third company will be named Thursday. With it, comes 500 jobs.

In all, nearly 900 jobs will soon be in Fishers.

“It’s a little bit like, if you build it, they will come, if you create that place that becomes special where people want to live, then you’re attracting the business right along with it,” OneZone President Mo Merhoff said.

The speech wasn’t just about jobs, it touched on public safety too. Pretty soon there is going to be a new way for people to talk to police by using a smart device.

Mayor Fadness says a captain developed an app that will soon allow residents to better communicate with officers. Big developments for 2016. Although Mayor Fadness says he’s working to keep a balance with the small town feel.

“So we’re going to work on infrastructure improvements and we’re going to continue build a social fabric of our community where people really feel a sense of identity with Fishers,” Fadness said.

Mayor Fadness didn’t address everything. Some business owners wanted to hear him talk LGBT rights after a protection bill failed in the statehouse.

He told 24-Hour News 8 after his speech that he’s trying to figure out how to address the issue. And he’s not sure if an ordinance will be drafted anytime soon.