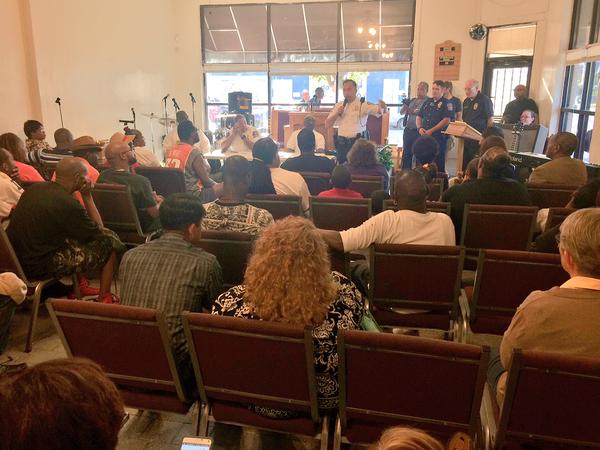 INDIANAPOLIS (WISH) – Investigators are following up on details after DeShawn Swanson’s death, the 10-year-old who was killed during a vigil on Saturday night.

Tuesday night, the police gathered with community members for a meeting.

They told residents crime is on the rise in that neighborhood of 40th Street and Boulevard Place.

Police wanted to talk about ways to reduce crime, reduce fear of violence and encourage residents to report crime.

“Even those in the game recognize that when you shoot a 10-year-old, it’s gone too far,” IMPD Chief Rick Hite said.

The meeting had two main goals.

Chief Hite hoped to encourage those who might know who killed DeShawn Swanson to come forward.

“They know who did it, they know who the suspect is, our job is to get them to tell us ,” he said.

Hite’s other goal was encouraging civility to prevent future crime. For that he said it takes the whole community.

He gave them the number for anonymous crime tips which is 317-262-TIPS.

IMPD officials told the residents that they are the best surveillance they have.

“Making sure there’s a constant conversation about how we avoid these types of things from happening in our city,” Hite said.

“The preachers are not enough, the police are not enough, but we need to come together as a community and figure out what we’re going to do,” the People’s Church Pastor Eli Johnson said.

Pastor Johnson went to the meeting because the shooting last weekend affected him deeply.

He wants his own 10-year-old to be able to play outside without the fear of violence.

“We’re all coming together and we’re all standing united because we’re all tired,” he said.

Drug use, specifically heroin, was mentioned a few times in the meeting as a cause of violence in that neighborhood.

The police also said that area can be prone to drug deals because it’s so close to the interstate and major roads in near north Indianapolis.