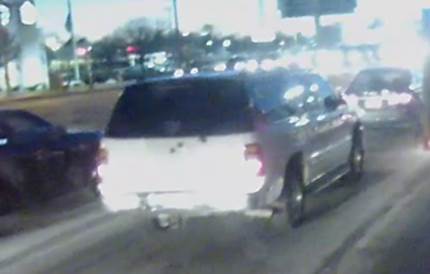 INDIANAPOLIS (WISH) – Police have identified a vehicle believed to have been involved in a fatal hit-and-run.

According to the Indianapolis Metropolitan Police Department, the deadly accident happened just before 7 p.m. on Feb. 9 in the area of West 38th Street near High School Road.

Police were initially called to the scene on reports of man struck by a vehicle. After arriving on scene, an unresponsive male was located in the west lanes of West 38th Street.

The vehicle is described as a white 2000-2006 Chevrolet Suburban, likely with damage to the front passenger side as a result of the collision. The vehicle also has a sticker at the bottom center of the rear window. Police are hoping someone recognizes the car from the photo.

“To have an actual photo of the suspect vehicle that we believe is involved in this hit-and-run is tremendous. It is excellent. It will give us a great lead and also a great resource through the community of anybody that is familiar with that vehicle or may have seen it,” said Officer Jim Gillespie with the Indianapolis Metropolitan Police Department.