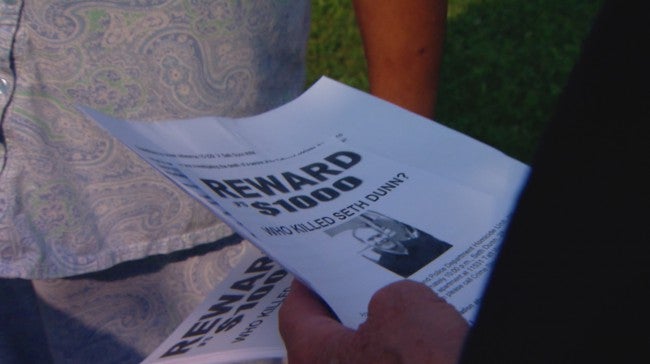 CUMBERLAND, Ind. (WISH) — Police are ramping of their search for a killer while using the help of the victim’s family and friends.

Police said 28-year-old Seth Dunn was found dead in his apartment last Thursday, June 25. Police said he was shot in the face.

Investigators returned to the scene today in force. They wanted to canvass the apartments and talk to neighbors again, hoping time and the presence of Dunn’s loved ones would influence witnesses to speak up.

On a mission to get answers, officers went door-to-door armed with questions trying to figure out who killed Seth Dunn.

“So you didn’t know (Dunn),” one officer asked a resident. “You didn’t personally see anything going on across the street here the other night did you?”

Detective Suzanne Woodland helped organize the second round of questioning.

“Just to let them know, hey we’re out here, we’re still looking and let the suspect know that we’re not stopping until we get him,” she said.

But if there’s one question Dunn’s loved ones want answered, it’s why?

“I was devastated,” said his co-worker Crystal Evans.

Last week, Dunn’s friends said they knew something was up when he missed his shift at work.

Police were called in only to find Dunn dead in his apartment. They say there were no signs of forced entry. It’s a tragic reality his father was struggling to cope with.

“My heart is broke,” Michael Dunn said with tears in his eyes. “You know, of course I want revenge. I can’t do that. I have to honor my son.”

Dunn’s father was overwhelmed by the kind words he kept hearing about his son. Dunn was described a loving and someone who gave the best hugs. Police said he wasn’t a troublemaker or a drug dealer.

“He would take the shirt off his back,” said Evans. “I’m not just saying that.”

It’s that caring personality that has everyone from investigators to family confused as to why someone would kill him.

“He’s not here now, I can’t change that,” his father said. “And hopefully we can get this resolved and bring some closure to this.”

That closure starts with hopefully getting questions answered.

“Any little thing might just be able to help us in a big way,” an officer reminded a neighbor.

“Think about it. It could have been your family member. You could’ve been one of us standing out here right now,” pleaded Evans.

One of the reasons officers say it’s been difficult to get answers is because they feel some of the people at the neighboring apartments might be afraid to talk to police.

That’s why they’re reminding people that they can call Crime Stoppers and remain anonymous. The number is 317-262-TIPS.