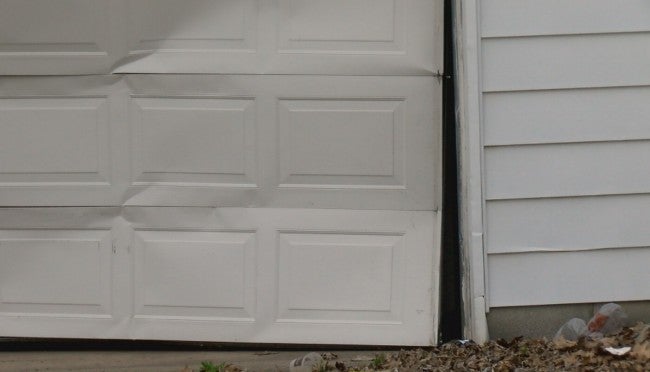 INDIANAPOLIS (WISH) — Police say a thief is using their vehicle to smash into garages before burglarizing them.

There were six break-ins reported Monday morning. Wayne Hunter, who lives on the city’s west-side was targeted twice.

“I came around the block through the alley in my car and seen that garage door laying over and this one here where they drove through it,” he said.

A smashed garage door and debris were scattered around his yard. Hunter knew exactly what happened; he had been burglarized.

“When they done it, they just went in there and got away with what they wanted or what they could get ahold of, and jumped back in their vehicle and left,” he explained.

Inside the garage, Hunter tried to figure out what exactly was stolen. But more than what he can recall is missing, at least in his main garage.

The door on his secondary garage was knocked off its hinges. It’s since been replaced.

“There wasn’t a lot in that garage for them to get because we keep everything, mostly, in this one,” he said.

Hunter estimates the thieves got away with thousands of dollars worth of tools and equipment.

But his two garages weren’t the only targets. There was one on the city’s east side and three others on the southwest and west sides.

Hunter has this message for the suspects.

“I’ve worked my whole life, then for somebody just to do this and walk away. I will catch somebody one of these days,” he warned.

If you have any information that could help in this investigation, contact Crime Stoppers at 317-262-TIPS (8477).