Rexnord workers call on Trump to save jobs 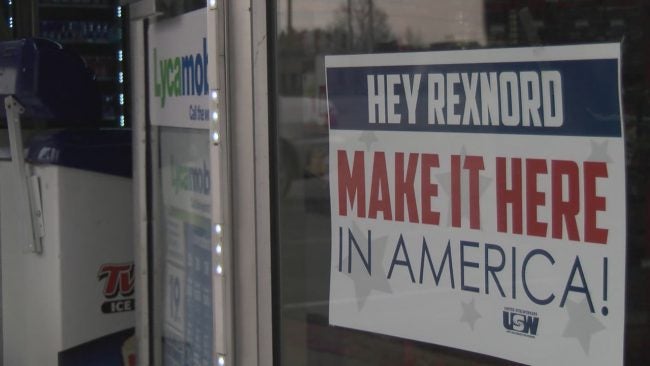 INDIANAPOLIS (WISH) — Rexnord workers are calling on President-elect Donald Trump to save their jobs, too.

Trump’s team said they reached a deal with Carrier to keep 1,000 local jobs. Brian Bousum, who’s worked at Rexnord for 22 years, still plans on losing his.

“Mr. Trump, we need your help. We’d like to keep our jobs too,” Bousum said.

Bousum said he’s happy some of his friends at Carrier will keep their jobs.

“We know our jobs are leaving us and it affects each and every one of us to the bone,” Bousum said.

The move will also deal a blow to people working near the Rexnord plant.

Pete Singh runs a corner store a block away from the plant. He’s praising Trump for his deal with Carrier, but he hopes Trump won’t stop there.

“If he can keep [Rexnord] here, that would be helpful for everybody,” Singh said. “The employees come here and spend their money and keep me going.”

It’s been more than a month since company leaders broke the news to Rexnord workers.

Bousum said he’s still trying figure out a couple things: Where he’ll work next and what Trump did to keep Carrier here.

“We do appreciate what you did for Carrier,” Bousum said. “Would you please come help Rexnord?”

Union leader Don Zering said in a phone call with 24-Hour News 8 that he’s happy for Carrier workers and proud of Trump but he’s not any more optimistic that Rexnord will stay.

24-Hour News 8 left a voicemail with Rexnord and asked if company leaders are willing to negotiate with Trump and Pence. No one has returned the call.