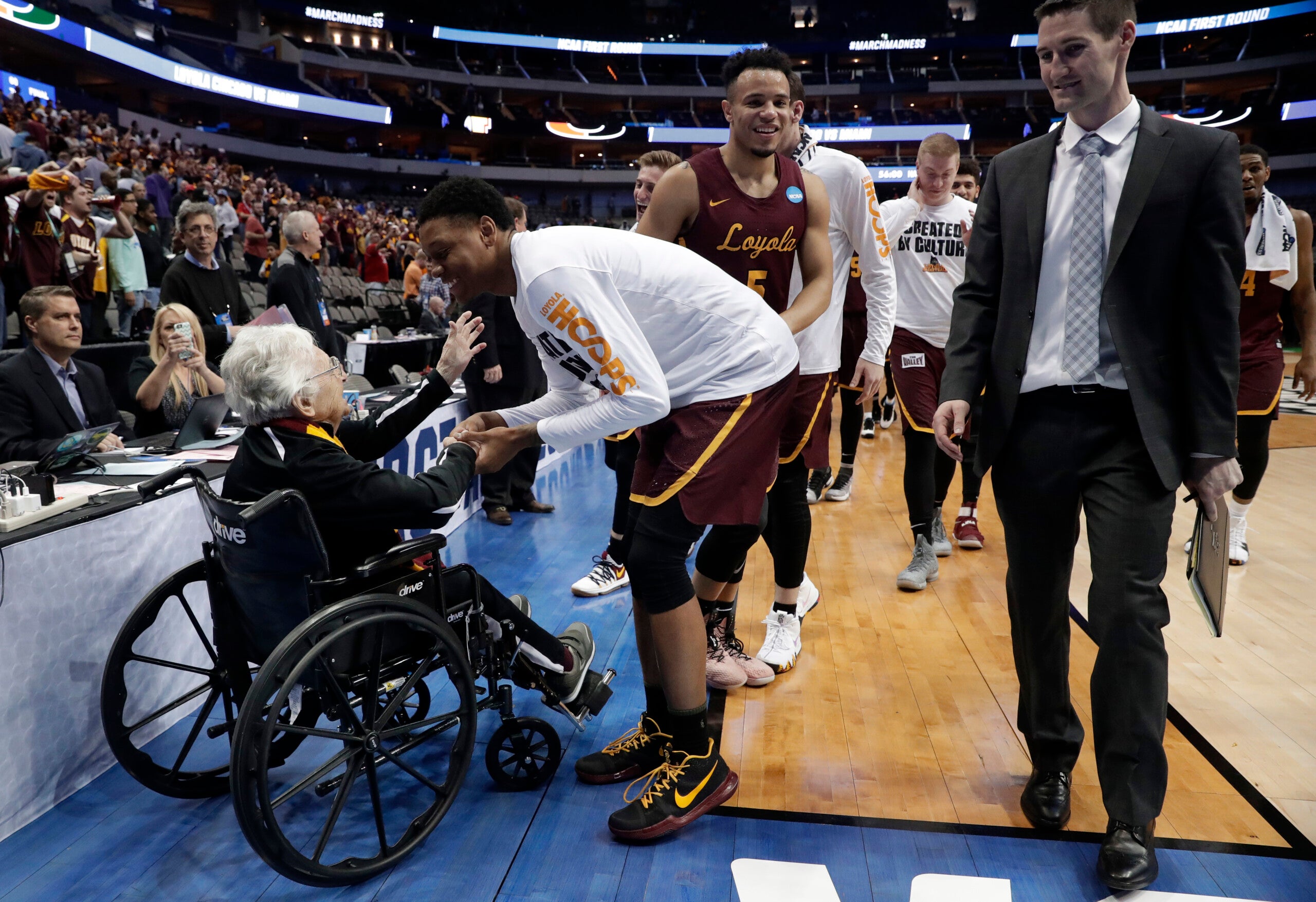 FILE - In this March 15, 2018, file photo, Sister Jean Dolores Schmidt, left, greets the Loyola Chicago basketball team as the Ramblers walk off the court after a win over Miami in a first-round game at the NCAA college basketball tournament in Dallas. Loyola Chicago is back in the tournament. And Sister Jean will be there, too. The 101-year-old team chaplain's lobbying paid off Tuesday, March 16, when the school reversed course and announced she will go. That means she gets to watch her beloved Ramblers in person for the first time this season when No. 17 Loyola meets Georgia Tech in Indianapolis on Friday. (AP Photo/Tony Gutierrez, File)
by: The Associated Press
Posted: Mar 19, 2021 / 05:14 PM EST / Updated: Mar 19, 2021 / 06:54 PM EST

Sister Jean Dolores Schmidt, the Ramblers’ 101-year-old team chaplain, was rolled into Hinkle Fieldhouse in her wheelchair. She was bundled up in a yellow-and-red scarf and wearing a mask that read “Loyola” shortly before the opening tip Friday night.

Sister Jean became an icon during Loyola’s Final Four run in 2018, but she hadn’t attended a game in person since the pandemic began. She recently was vaccinated but has continued to keep her distance from the team, delivering the pregame prayer virtually all season and again prior to the Ramblers’ game against the Yellow Jackets.

In the game, Lucas Williamson scored 21 points in a dynamic performance by the defensive whiz, All-America forward Cameron Krutwig added 10, and eighth-seeded Loyola Chicago beat No. 9 seed Georgia Tech 71-60 to mark a triumphant return to the NCAA Tournament.

Jordan Usher scored 15 points, Michael Devoe had 14 and Jose Alvarado 13 for the Yellow Jackets, who were forced to play without ACC player of the year Moses Wright after the big man tested positive for COVID-19 earlier in the week.