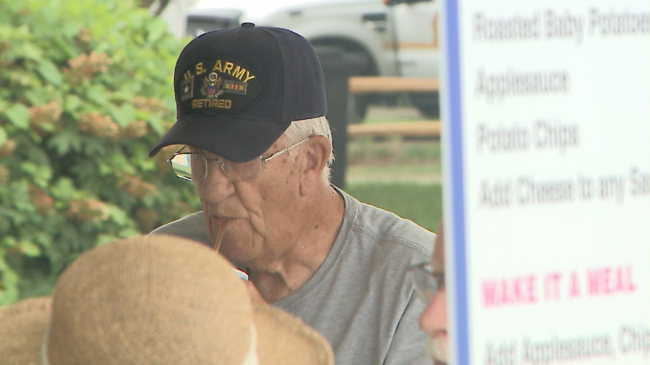 INDIANAPOLIS (WISH) – The Indiana State Fair was filled with heroes on Monday.

The fair honored all military service members by giving them and their families free admission into the fair.

Kimberly Susko said, “I was in the United States Navy stationed in Guam with the CBs.”

William Schurtz said, “I joined the army in 1955, switched to the Air Force for four years, and then back to the Army. I retired in 1978.”

In addition to veterans, there were several people who have just joined the armed forces that took advantage of Military Day.

Jeffery Cook and Josh Carter both said they’ve just signed to contract with the United States Marine Corps. The two were enjoying getting to talk with several men and women who have been where they are heading.

Carter said, “It’s nice to talk to them and learn their war stories and hopefully I’ll have some of my own soon.”

Many of the military veterans and active duty service members could be seen roaming around the fairgrounds enjoying the rides and of course the fair food. For them, being honored by being admitted for free was a small gesture that meant a great deal. It gave the service members from all branches a chance to interact, share stories and thank each other for fighting for the nation.

Schurtz said, “A lot of times you’ll see us walk up and shake hands with each other. And one of the phrases we will say is, ‘Welcome home,’ in recognition of the fact that we did make it back home.”

Fair officials said while they have offered free admission to military service members and their families for years this is the first year they created fair events specifically for the veterans and active military members.