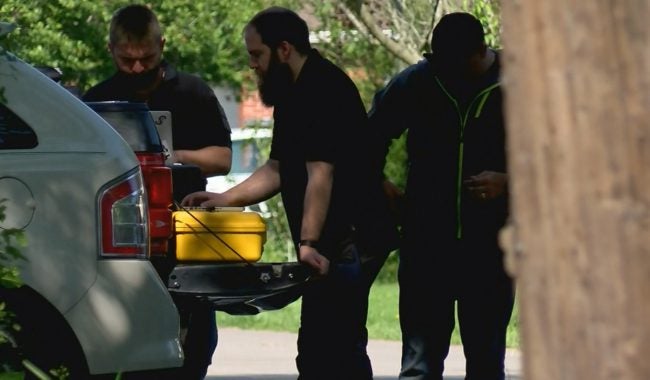 PLAINFIELD, Ind. (WISH) — A spokesperson for Plainfield High School says the district had no involvement in Tuesday’s investigation.

The school released a statement on social media that said:

We are aware of criminal investigative activity in Plainfield this morning, related to the cyber threats that began in December. Today’s activities in no way affect the celebrations, finals or any business going on in our schools. Students are safe and proceeding with normal schedules and procedures.”

Tuesday also marked the last day of the school year, a promising way to end the year for students and parents.

As kids headed to school, authorities including the FBI zeroed in on a home on Avon Avenue.

“It’s kind of a shock because I woke up this morning and there’s all kinds of helicopters and everything going on around me. I didn’t know what was going on,” said Wesley Stewart, who Iives in the neighborhood.

Stewart is also a senior at Plainfield High. The issue of security became a topic of discussion with his friends.

“There were definitely holes in security and ways people could get around if they needed to. It was definitely talked about in the halls,” he said.

Peggy Goold was also rocked by the threats. She lives in the neighborhood and says there’s constant activity at the home. She says people are in and out and she often sees teenage boys there.

“It was kind of creepy because right over here by us, I got a daughter-in-law that works at the Buckle at the mall and a grandson at the middle school. It’s a scary thought,” she said.

The first threat was made on social media in December, promising a blood bath and deaths at the school. On December 17, officials closed school and postponed finals. The next day, management at the Shops at Perry Crossing evacuated the mall because of online threats.

“I feared it at first, but after awhile it got kind of old,” said Stewart.

” How do I know they’re not going to blow the school up? You know. It happens. We’ve had too many school functions happen,” Goold said.

Authorities raided several homes on January 5 including a home on the same street as Tuesday’s search, Avon Ave. But a suspect has yet to be named.

“I’m glad they’re at least taking it seriously and still investigating and trying to find who did this,” said Stewart.

“Catch him. Put him in jail. Do something with him,” said Goold.

Investigators were on the scene for several hours, wrapping up just before noon. They were seen carrying out tubs and electronics. Police also had dogs on the property. Authorities would not say what, if anything, they found.