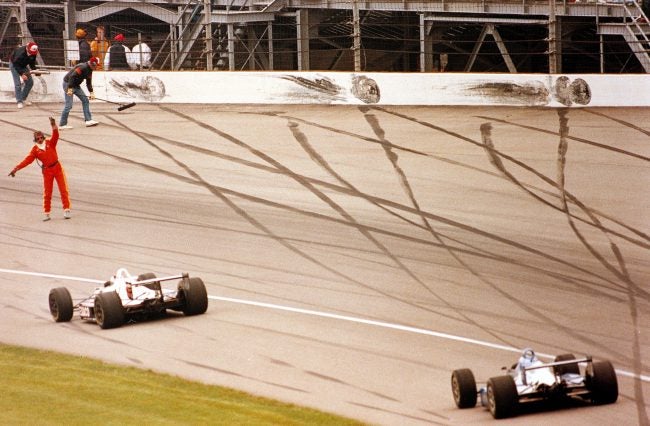 INDIANAPOLIS (WISH) – Many remember 1992 as one of the most exciting races in Indianapolis 500 history. Al Unser Jr. won his first Indy 500 over Scott Goodyear by just four one hundredths of a second – the closest margin of victory in race history. That excitement overshadowed what was a very chilly day for fans at the Brickyard.

“I’ve never heard of a wind chill factor at the end of May. So it was basically freezing cold, a lot of people wore shorts, and it was a problem all day long,” says Indianapolis Motor Speedway race historian Donald Davidson.

“There were a lot of crashes because the track surface was so cold, that the tires had a hard time adhering, so every time there was a restart, somebody would lose control and there would be another accident,” Davidson says.

1992 was the coldest race in history, with a daytime high of only 58 degrees.

Speaking of cold – 1989 was a year that many fans and drivers won’t likely forget. It was the year for the latest snow reported in Indianapolis. It was also opening day at the track for drivers.

Davidson remembers two drivers doing a few practice laps while flurries were in the air.

“I do remember that there was not really snow flurries, but every now and again something would sort of drift in front of your line of vision and you thought oh this is not good,” says Davidson.

Rain has impacted the race more than any other weather phenomenon. The 500 has had to move to another day due to rain five times. Of those five, three of those races had to be finished two, to as long as seven days later than the original start day. Rain has shortened the race seven times, most recently in 2007.

One of the scarier situations in which the race was called early, was 2004, when a tornado warning was issued during the race for the Speedway.

Storm Track 8 meteorologist and Weather Executive Producer Ken Brewer was on the air tracking the storm in 2004.

“You have a lot of people in a compact place with not much time to evacuate people out of there.” Brewer said.

He said the it had to be stressful for those in charge of the event.

“Just knowing the pressure of major events going on in Indianapolis, and you had what looked like a pretty strong tornado that was bearing down on Indianapolis,” said Brewer.

The 1970s seemed to get the brunt of the weather. Postponements came in 73, 75, and 76. Davidson remembers the 1975 race as especially frustrating.

“At the time, Bobby Unser was leading, but Johnny Rutherford was catching him, and then A.J. Foyt in third was catching both of them, and what could have been a really great battle to the finish was ruined because in came the weather, and it was just a deluge, like a monsoon,” said Davidson.

Despite the abrupt and non-dramatic ending, Davidson says he was in awe of the fan reaction at the end of the race.

“They put the red flag out and the checkered flag out, and here came Bobby Unser and Johnny Rutherford almost together, running maybe 70mph, it looked like a crawl, splashing through the water, and the crowd cheering and I thought isn’t that amazing, you don’t have to be doing 200 plus to get cheers here.” says Davidson.

Some other interesting facts about race day – The hottest race day temperatures was 92 degrees in 1937, with the 114 year average high temperatures standing at just above 77 degrees. The highest wind speed was recorded in 1995 at only 18 mph, and something very interesting – despite the many rain delays, the Indianapolis 500 has never run in the month of June.