Widow claims somebody tried to turn her husband into a mummy 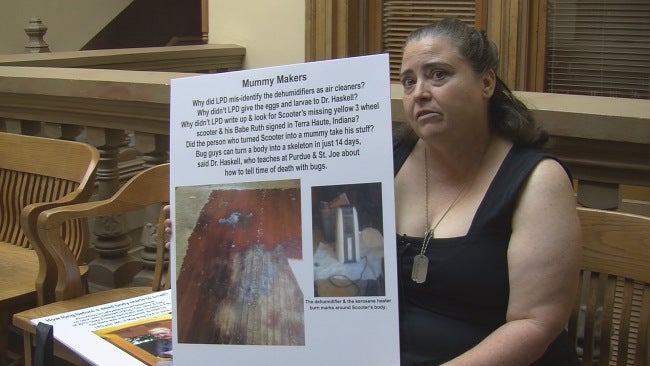 TIPPECANOE COUNTY, Ind. (WLFI) – A Tippecanoe County court is still trying to determine whether a woman accused of not reporting her husband’s death, while still collecting his benefits, is competent to stand trial.

But Ila Solomon still insists her husband had only been dead for five days when his body was discovered last year.

Solomon is accused of keeping Gerald “Scooter” Gavan’s body inside their Shawnee Avenue Home for nine months after his death.

Solomon says she left the home two days after he died, and she believes that’s when someone placed several kerosene heaters and dehumidifiers inside the home to speed up the body’s decomposition.

She believes someone was trying to prevent her from making a claim to Gavan’s trust fund.

Although an autopsy determined Gavan died sometime in June of 2013, Solomon claims he died on April 28, 2014.

“Oh, it definitely was very far along. Scooter was a mummy,” Solomon told WISH-TV’s sister station WLFI. “There’s a lot of people who know how to make a mummy.”

She claims there were several people who saw Gavan during the time when the autopsy claims he was dead.

She’s scheduled to be evaluated on July 29 to determine whether she is competent to stand trial.

A hearing has been scheduled for Aug. 14.