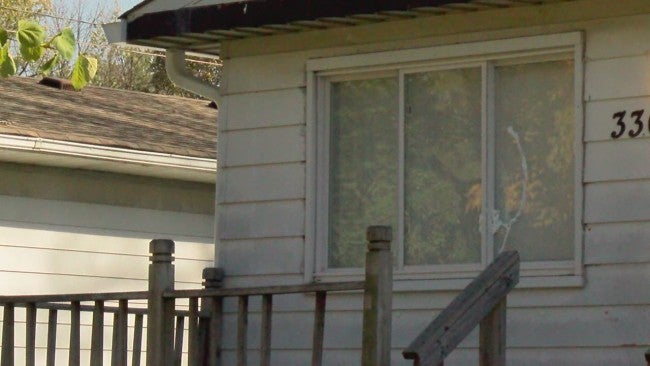 INDIANAPOLIS (WISH) — The search is on for the suspect who sprayed bullets at a retired IMPD officer’s home early Monday morning. The officer and his daughter were sleeping when they were hit.

IMPD say they were not the intended targets. Police believe the suspect or suspects meant to hit the neighbor’s house, where an elderly woman lives.  It happened on the 3300 block of Hawthorne Lane.

“It sounded like a fire cracker, then it sounded like pop, pop, pop. Some of them was loud, some was small,” said the 75-year old woman who did not want to identify herself.

The woman says she has had ongoing issues in her house where she lives with her granddaughter. She says the family was barbecuing there on Sunday afternoon, when somebody shot at them, hitting the outside of her home. There were no reported injuries.

Inside, the home has around 20 bullet holes though the walls, and ceiling. Many rooms have been hit multiple times. Every single room, has at least one.

“Cause I fear for my life. I really do,” she said.

Police believe the suspect or suspects had the wrong home early Monday morning, when they sprayed bullets through her neighbors home. At least 35 through the front of the home. Shattered glass from the storm door littered the porch, and even spilled out onto the street.

“It could’ve been me, and whoever it was, I hope they catch him,” she said.

63-year old Wallace Shobe, who retired from IMPD back in 2010, was grazed by a bullet on the head. Hospital officials say he had to undergo surgery. His daughter, 45-year old Phyllis Shobe was shot in the forearm, according to police. At last check, they are both in stable condition at Eskenazi hospital. The woman is hoping that by speaking out, that somebody will come forth with information before an innocent life is lost.

The woman says her  house was also shot at about a month and a half ago. She shared with WISH-TV why she felt she was a target, however, WISH TV will not publish that until police confirm the information.

Anyone with any information that could help authorities in this  investigation is asked to call Crime Stoppers at 262-TIPS. Callers can remain anonymous.