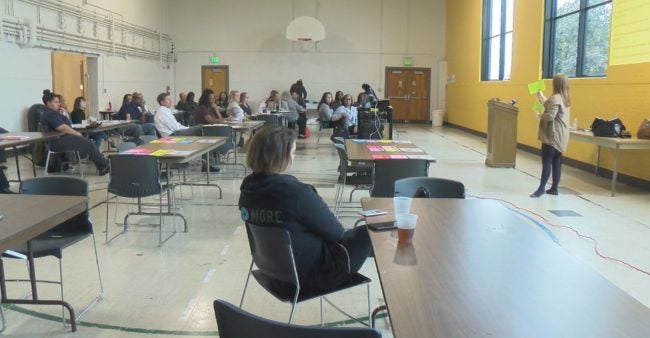 INDIANAPOLIS (WISH) – A woman is fighting back against domestic violence just a few days after police said a man brutally beat his girlfriend.

Lindsay Stawick lost one of her best friends in 2007 when 20-year-old Heather Norris went missing. Norris’s boyfriend eventually told police he stabbed her to death.

In the months that followed, Stawick changed her career path. She now educates people on domestic violence.

Stawick spoke Thursday to a group of educators and youth workers.

“I’m sure you have seen the news story going around,” Stawick said to the group.

She was referring to the story of Carleigh Hager. Hager is recovering in the hospital after police said her boyfriend choked and beat her.

Hager’s sister, Megan Splichal, is visiting the hospital every day.

“It’s animalistic what happened to her,” Splichal said. “It’s not normal to want to do those things to someone no matter how angry you are.”

“Her story, unfortunately, is not unique,” Stawick said. “This happens to a lot of people. They just don’t always make the news.”

One in three women faces abuse, according to a study from the World Health Organization.

Stawick gave the group cards with scenarios in which young people face abuse. She also played videos with advice on how to teach kids about consent and compassion.

“My hope is that we become a kinder, empathetic, passionate society and community,” Stawick said.

She encourages educators to teach toddlers about compassion.

Her hope is that, by the time those kids grow up, cases like Carleigh’s and Heather’s won’t be so common.

“There’s too much violence,” she said.

Hager’s family said they expect her to make a full physical recovery with plastic surgery. Prosecutors charged her now ex-boyfriend with battery and strangulation.