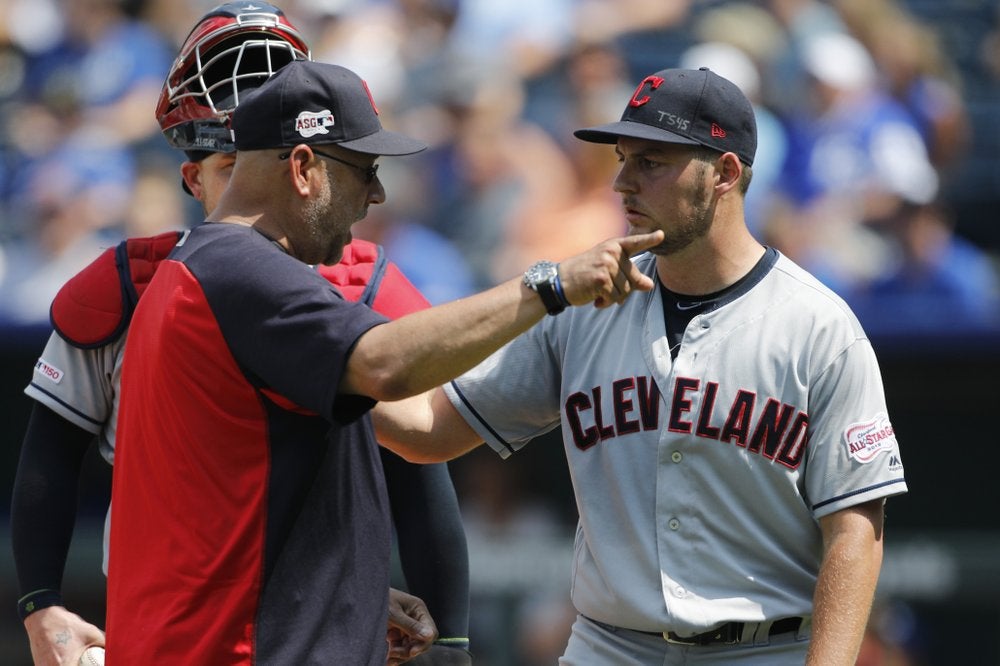 Cleveland Indians manager Terry Francona, left, has words with pitcherTrevor Bauer, right, as Bauer is taken out in the fifth inning of a baseball game against the Kansas City Royals at Kauffman Stadium in Kansas City, Mo., Sunday, July 28, 2019. Bauer threw two baseballs into the stands as he reacted to Royals batter Nicky Lopez's two-RBI single. (AP Photo/Colin E. Braley)
by:
Posted: Jul 29, 2019 / 06:07 AM EST / Updated: Jul 29, 2019 / 06:26 AM EST

KANSAS CITY, Mo. (AP) — Back in the clubhouse, Trevor Bauer calmly and profusely apologized. It was quite the contrast from his emotional outburst earlier in the game.

In a startling scene, Bauer suddenly heaved the ball from just past the mound over the center field wall while being taken out of the game Sunday in the Cleveland Indians’ 9-6 loss to the Kansas City Royals.

“I’m an intense competitor and that fire is what drives me,” Bauer said before answering questions. “Today it completely consumed me and took over. I just wanted to say I’m sorry for how I behaved. It won’t happen again.”

It was not clear at the time whether Bauer was upset with his performance or that manager Terry Francona was pulling him. An All-Star last year, Bauer (9-8) had just allowed a two-run single to Nicky Lopez that gave the Royals a 7-5 lead with one out in the fifth inning.

When Francona emerged from the dugout, Bauer turned, took a couple steps and fired the ball over the 410-foot mark.

“Nothing really broke my way,” Bauer said. “Even when I felt like I executed good pitches, they were capped off the end of the bat. So, the frustration built up.

“Right now, I’m just focused on the negative impact I’ve had on our culture, and our team and organization, and trying to make reparations to the people in this clubhouse and in our organization. We’ll handle whatever else comes down the line from there.”

Bauer said he spoke to his teammates, but wasn’t sure how they would take his apology.

“It’s hard to tell right now,” he said. “Everyone’s emotions are high. I just wanted to talk to them, to let them know how I’m feeling and how I feel like I let them down both personally and professionally. Hopefully we can move past that.”

Bauer, whose quirky pregame routine includes a lot of long toss, put that practice to use as he let fly. Shortstop Francisco Lindor incredulously watched while second baseman Mike Freeman flinched as Bauer wound up. Rookie center fielder Oscar Mercado had his back turned and was looking at the wall when he saw the ball land, and quickly spun around, trying to figure out what happened.

As Francona reached the mound, he and Bauer appeared to exchange words. Francona pointed Bauer toward the dugout, then followed closely behind him. They both disappeared into the tunnel. They later emerged, separate but both fuming.

“That’s just between us,” Francona said about what he told Bauer. “We certainly discussed it, as we should, and he talked to the team. Today was a frustrating day. He did it out of frustration. I don’t ever want to say something that I don’t mean out of frustration.”

“Man, frustration’s probably the right word. Coming out of the pen (pitching coach) Carl (Willis) said he had great stuff. I was kind of worried because I know he’d been sick all week,” he said. “The inning, so many things went wrong in that inning. We lose a ball in the sun, we get the tapper back to him, there’s a walk or two mixed in, some hits. Just a couple of balls that weren’t hit hard. It seemed like everything that could happen did.”

Pitchers have made similar throws in the past, for various reasons.

In 2002, Arizona reliever Byung-Hyun Kim got the last out at Yankee Stadium, then threw the game ball onto the netting atop Monument Park in the left-center field. In the 2001 World Series, he gave up a pair of late homers that let New York rally past the Diamondbacks.

In 1991, fired-up Reds reliever Rob Dibble threw a ball over the center field wall after closing out a game at Riverfront Stadium. His throw hit a fan, and Dibble was suspended by Major League Baseball.

In 1986, Yankees pitcher Dave Righetti gave up a key home run and tossed the ball over the right field wall at Exhibition Stadium in Toronto.

Danny Duffy (5-5) picked up the win, though he was hardly stellar. He allowed five runs (four earned) on seven hits in six innings. Duffy had lost 10 straight decisions to the Indians, dating to May 6, 2015, the most consecutive starts and decisions lost by a Royals pitcher against any opponent.

“It was a grind,” Duffy said. “I feel like I got 16 of the 18 outs on fastballs. I didn’t feel like I had my off-speed working really at all until the fifth.”

Trailing 5-3 coming into the inning, the Royals chased Bauer after Lopez’s hit put KC ahead. Ryan O’Hearn, Cheslor Cuthbert and Meibrys Viloria also had RBIs in the inning.

Despite the offensive outburst, most of the discussion in the victorious clubhouse was about Bauer’s throw.

“It was a sign of frustration. I get it, I’ve been there. All these guys over here,” Duffy said, nodding toward a group of relievers, “always talk about how I can’t (throw it over the center field fence from the mound). I promise you I can. But I’ve never tried.”